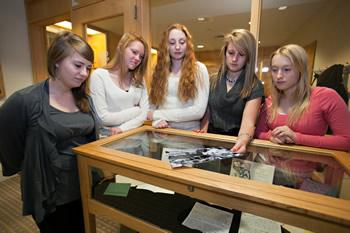 Students from Shamokin Area High School, where Jean Louise Stellfox ’60 taught joined in on activities associated with the residency this year. From left: Stephanie Dressler, Amber Martin, Megan Sheriff, Courtney McGraff and Kayla Hart look at a photo of Stellfox and Robert Frost during his visit to Dickinson in 1959.

“We wanted to invite someone about whom we can all say, ‘Wow!’” Associate Professor of English Susan Perabo explained in her introduction to the Harold and Ethel L. Stellfox Visiting Scholars and Writers Program award. “As in, ‘Wow! Margaret Atwood is sitting right there! Margaret Atwood! Wow!’”

Atwood, seated in the front row of the Anita Tuvin Schlecter Auditorium, became the seventh recipient of the Stellfox Prize on Nov. 29. After Perabo’s enthusiastic introduction, she received the award and read selections from her latest work of nonfiction, the memoir In Other Worlds: SF and the Human Imagination, as well as her most recent novel, The Year of the Flood. Past winners of the Stellfox Prize include Richard Russo, Rita Dove, Maxine Kumin and Ian McEwan.

Atwood, a prolific writer, published her first book of poetry in 1966. Since, she has more than 50 titles to her name, including novels, poetry, short fiction, nonfiction, children’s books and a play. Some of her best-known works include the novels The Handmaid’s Tale and Alias Grace, and Booker Prize-winning work The Blind Assassin.

Atwood’s residency at Dickinson produced no short supply of “wow!” During her time on campus, Atwood’s schedule included a public reading, a reception with students and faculty at the President’s House, a question-and-answer session, lunch with students, and teaching a class for advanced creative writing students.

Classrooms across campus buzzed with excitement about the visit. Atwood’s popular success ensured that many students across disciplines were familiar with her work. The English department sponsored a free screening of the film adaptation of Atwood’s novel The Handmaid’s Tale on Nov. 28  at the Carlisle Theatre. The next afternoon, literary societies Belles Lettres and the Literati hosted a discussion of The Year of the Flood, in preparation for Atwood’s reading. The English department provided free copies of the novel to students, and approximately 30 students participated. Belles Lettres president Emily Mininsohn ’12 said her favorite aspect of Atwood’s visit was “the way that so many English majors and people who like literature in general came together for the events leading up to [it].”

Tuesday night’s reading, held in ATS, was the visit’s kickoff event. Atwood’s memoir selection played particularly well to the student-filled audience; with insight and self-deprecating humor, she explored the origins of her insatiable love of literature and her pursuit of its study through high school, college and beyond. “I was really struck by her sense of humor,” noted first-year economics major Paul Gaver. Atwood concluded the event with a song from The Year of the Flood, and she was met with enthusiastic participation when she turned the refrain over to the audience.

Perabo reports that while at lunch with about a dozen students on Wednesday, Atwood was particularly curious to learn about their tastes and interests. “She asked questions like, ‘What are young people today worried about?’” Perabo says, “You could see the wheels turning as the students answered, and I was thinking, this is all going to turn up somewhere, either in her fiction or her nonfiction.”

English major and creative-writing minor Justin Taylor ’13 attended Atwood’s public events as well as the class she taught and Wednesday afternoon lunch. He says the visit emphasized for him “the importance of being a reader—not just reading in general, but the importance of exploring different genres. It was obvious that Ms. Atwood still has a thirst for learning, no matter the field of study, and I admired that.”

Atwood was drawn to visit Dickinson in part because of the legacy of the Stellfox prize. The prize honors Jean Louise Stellfox ’60, whose interaction with visiting writer Robert Frost during her junior year inspired her to teach English. After 30 years at Shamokin Area Senior High School engendering love of literature in countless students, Stellfox bequeathed a $1.5-million gift to Dickinson to establish the program, named for her parents. In a preface to her reading, Atwood explained that she agreed to visit in part because of Stellfox’s moving story. Perabo reports that Atwood couldn’t get enough information about the inspirational teacher. “She wanted to hear everything I knew about Jean Stellfox.” Shortly after leaving, Atwood tweeted, “The Jean Stellfox story is so touching,” calling her an “angel English teacher.”

In a gesture toward commemorating Stellfox’s contributions to the Shamokin community, five students from Shamokin Area High School came to campus during the visit to participate in the Q&A session and learn more about Stellfox and Dickinson. Also in attendance at Atwood’s reading were Mary Ann Stellfox Gray, Jean Stellfox’s cousin, and Todd Kerstetter ’93, the attorney who helped to establish Stellfox’s gift.