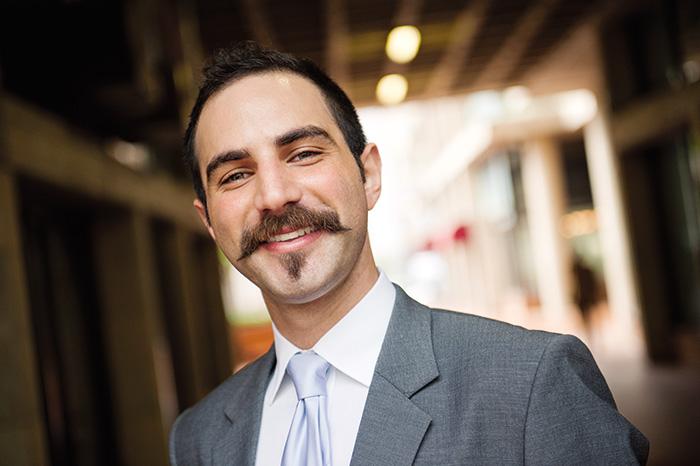 The first time I encountered Pablo Thaler ’07 he was a slim, shaggy-haired, scruffy-bearded first-year student with arresting eyes and a captivating smile. Pablo had arrived just a few months earlier from Buenos Aires as the first recipient of the Global Campus scholarship, designed by former Vice President Robert J. Massa and former trustee Yale Asbell ’78 to benefit Jewish students from South America.

I’d already heard about Pablo from Massa and Asbell and was eager to meet this wunderkind. My husband, David Liu ’78, and I introduced ourselves when we spotted Pablo at the Massas’ annual holiday party a few blocks from campus. Soon we were sharing an intense and intellectually elevated conversation about international politics with this young man who spoke with a heavy Spanish accent.

The last time I encountered Pablo was just a few months ago—a block from the White House. He’s still slim in his slick European suit, but his hair is sleek and his remaining facial hair now a magnificent mustache verging on a handlebar. The accent is still there, faintly. He’s gone from boy to man, from a scholar of politics to political analyst at the Organization for American States (OAS). The charm factor? Still very potent.

On this warm September morning we settle in for a cup of Earl Gray tea (me) and espresso (Pablo) at a sidewalk café and chat about what has transpired since he graduated with a double major in international studies and international business and management (IB&M). Those first two years out, he earned his master’s degree from Johns Hopkins University’s Paul H. Nitze School of Advanced International Studies and was interviewing at OAS, just as a government coup was rocking Honduras.

The crisis there enabled Pablo to display his grasp of Latin American political systems, one of the areas he studied with Mark Ruhl ’70, the Glenn E. and Mary L. Todd Professor of Political Science. “Although I was from Argentina, I came here not seeing the big picture—the shared issues the region faced and how it related to the whole,” says Pablo. “Dickinson changed me.”

The Honduran coup occurred on a Sunday in late June, a few days after Pablo’s interview with OAS. Though he spoke Spanish, Portuguese, Italian and English, he didn’t have a writing sample that displayed his ability to craft analytical memos in Spanish—a requirement for the job. By Monday morning he had plunged into the constitutional controversy and began mapping the interests of key actors. He delivered a two-pager outlining possible scenarios for conflict management. Then he sent bonus updates throughout the week. That cinched it for the OAS.

Pablo was hired and promptly sent to Honduras for three months. In Tegucigalpa, he met with the parties involved in the dispute to “hear the concerns of all the political actors. OAS acts as a political forum and reaches out in periods of turmoil.” OAS, he notes, is the world’s oldest regional organization, founded in 1948 at a meeting led by U.S. Secretary of State George Marshall. “It’s based on four core pillars: democracy, development, human rights and security. I work mainly on the democracy pillar.”

Today, besides Honduras, he focuses on Ecuador, traveling periodically to both countries and producing analytical reports. “We come in to assess situations and advise governments on how to avert future crises,” he explains. Pablo is also contributing to the design of innovative political-analysis tools that integrate information and communication technology.

Had it not been for Pablo’s Dickinson scholarship, he’d have been an Argentinean technician—an electronic engineer like his father and uncles—rather than an American-trained theoretician. Now he’s able to apply his technical facility to social science. He plans to extend his reach by pursuing a Ph.D. in prospective analysis or behavioral economics.

“I’d like to balance a career in public civil service with work in consultancy and education,” he says, and construct a career inspired by Michael Fratantuono, associate professor of IB&M and international studies, who he considers a model mentor. Fratantuono was Pablo’s advisor at Dickinson and chose him as his first teaching assistant for his course The Global Economy.

Of Pablo, Fratantuono says, “In terms of intellectual maturity and insight, depth and breadth of understanding, and ability to effectively speak and write about ideas, he is among the top five students I have encountered at Dickinson.”

Though he’s now working in the capital of democracy, Pablo envisions returning to his home region within 10 years. “I don’t rule out running for public office. That’s why I am trying everything I can to improve the stability of our political environment—to allow for the kind of planning that would enable future generations to pursue their dreams.”