From Raven’s Claw to Rising Star 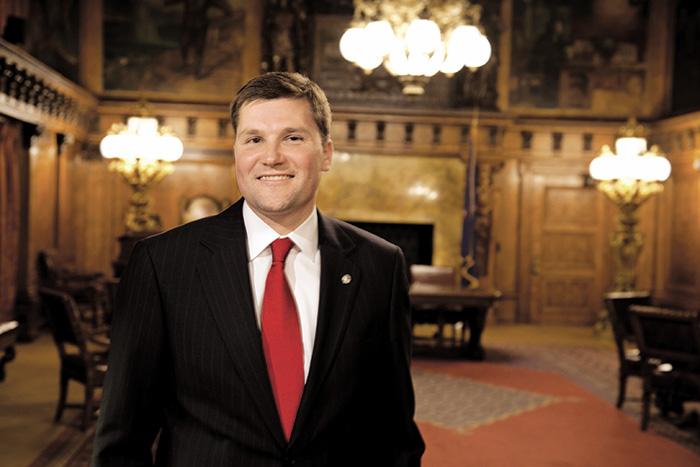 Luke Bernstein ’01, who was attracted to Dickinson’s “warm, wholesome, historic feel,” is right at home in Pennsylvania’s extraordinary statehouse, which was dedicated in 1906.

Luke Bernstein ’01 still remembers his first visit to Dickinson, taking the High Street exit off I-81, glimpsing the Denny tower for the first time and finally reaching the campus. “You look to the right, you see Old West, and you don’t need to see anything else,” he reminisces.

Though it’s been just 10 years since Bernstein graduated, his career has been jam-packed with unexpected twists and opportunities. Recently, he took time out of a hectic day at the picturesque Pennsylvania capitol to talk about his work, his goals and the impact Dickinson has had on his development as a political leader.

Bernstein is now deputy chief of staff to Gov. Tom Corbett. In the governor’s office, he has found the perfect outlet for his interpersonal skills. Upbeat and engaging, Bernstein describes the position as one centered on outreach.

“[It’s about] working with people and making a difference,” he explains. Bernstein oversees the governor’s constituent outreach as well as appointments to the state’s boards and commissions. He also oversees the offices of correspondence and public liaison and regional offices in Pittsburgh, Philadelphia and Erie.

“For the first two months, the major focus for everyone was the budget,” particularly the $4.16 billion deficit his administration inherited in January 2011, Bernstein points out. Another early challenge he faced was the flooding that ravaged eastern Pennsylvania in September.

He is particularly proud of the prompt response the governor’s office provided to the many communities in need. Despite the difficult situations he encounters, Bernstein describes himself as optimistic, with a positive attitude and a collaborative approach. “You need a team to get anything done,” he says.

The path to a political career was not what he envisioned when he graduated a decade ago. A political-science major, Bernstein’s first job was on Wall Street. After the Sept. 11 attacks, he rethought his priorities and took a job on the communications team of former Sen. Rick Santorum (R-Pa.). Soon he was tapped by the Bush/Cheney campaign to be its coalitions director for the 2004 election. Shortly thereafter, President George W. Bush named him as a domestic-finance advisor for the U.S. Department of the Treasury.

In 2006, he returned to Pennsylvania and Santorum’s team as deputy campaign manager. After Santorum lost his re-election bid to Sen. Bob Casey (D-Pa.), Bernstein became executive director of the Republican Party of Pennsylvania. He joined Gov. Corbett’s staff in January 2011.

Bernstein’s trajectory has garnered him much praise. In 2008, Politics Magazine named him a national Rising Star and, in 2010, one of the most influential people in Pennsylvania. Last year, he was awarded the Republican Party of Pennsylvania Leadership Award. A resolution recognizing his accomplishments hangs in the GOP state headquarters.

For all his success in state and national politics, Bernstein still considers a team-teaching opportunity at Dickinson to be a key accomplishment. In spring 2008, he co-taught a course on the presidential election. At the time, he was the executive director of the state GOP; another instructor was Mary Isenhour, his Democratic counterpart. Professor of Political Science James Hoefler, Bernstein’s former advisor and one of his college influences, rounded out the team.

“It was such a unique opportunity,” Bernstein says of the course. “It was really the first of its kind.” Though all his students have graduated, Bernstein still receives e-mails from some, declaring it one of the best classes they had taken at Dickinson.

Bernstein reflects on one of his Dickinson extracurricular involvements as an important leadership-development opportunity. “Of any organization I’ve ever been involved with, I’m proudest to say I was part of Raven’s Claw,” he says. The leadership society’s advisor, Ben James ’34, was one of his life’s major influences. James was “an incredible leader” and an “icon” who “taught the principles of life,” he says. Bernstein still returns to campus each spring for the Raven’s Claw tapping ceremony.

In the midst of Bernstein’s most-recent career changes, he and wife Meg Graves ’03 welcomed son Ben in June. Though he’s not sure what his next career step will be, Bernstein does know that in 10 years he hopes to coach Ben’s Little League baseball team. Professionally, he intends to create substantive change in the community, explaining, “Making a difference is truly what drives me.”