Déjà vu All Over Again 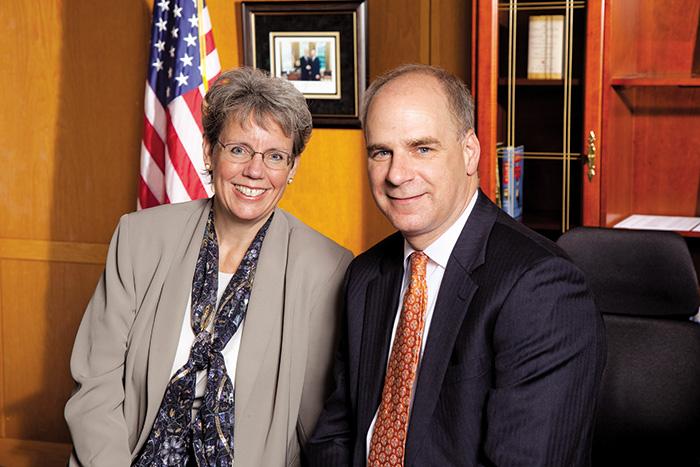 “There are a lot of things we could be doing differently, and that’s the excitement of this administration,” says Morton. “They have a vision, and that’s what intrigues me.”

They’ve done this before, in the 1990s for former Dickinson political-science professor Eugene Hickok when he was secretary of education under Gov. Tom Ridge. At the time, Tomalis was executive deputy secretary under Hickok, while Morton served as director of the Bureau for Curriculum and Academic Services.

Tomalis then moved on to help implement No Child Left Behind, the game-changing education-reform law enacted by President George W. Bush in 2001. After serving one term with the Bush administration, Tomalis co-founded Chartwell Education Group and later joined Dutko Worldwide (now Dutko Grayling), both of which consult for nonprofit organizations and private-equity firms investing in education companies.

Morton, a political-science and American-studies double major who began her career as a social-studies teacher, began missing her work with children soon after joining state government. From bureau director, she joined Gettysburg Area School District as a central-office administrator. Morton went on to become executive director of the Capital Area Intermediate Unit, which provides support services to central Pennsylvania districts and operates several niche education programs, such as the Capital Area School for the Arts and the Capital Area Online Learning Association.

In January 2011, newly elected governor Tom Corbett asked Tomalis to join his administration. The former political-science major didn’t think too hard about the decision, as Corbett’s platform included significant education reform. “You think through the opportunities to really have a role in [affecting] children’s lives,” he says. “When the governor asked me to join his cabinet, it was kind of hard to say no.”

As secretary, Tomalis also serves on the boards of Pennsylvania’s public higher-education institutions, including Penn State University’s. Within days of former assistant football coach Jerry Sandusky’s arrest in November, Tomalis was named vice chair of the board’s special committee to investigate the college’s response to the sexual-abuse allegations.

Tomalis and Morton plan to upend traditional notions of public education, just as they did the last time they worked together. “Back in the 1990s, when we passed the charter-school law, there weren’t a lot of charter schools in the country,” recalls Tomalis. “It was considered an outlier issue. Now, 38 states have charter laws … and [charter schools are] embraced by the Obama administration.”

Morton also points to the success of online education since then. “Whether or not a student is in a class 180 days is less significant to me than that student being able to demonstrate that they’ve learned the content of a course,” she explains. “When you can create the flexibility for students to learn at their own pace and in a manner that best suits their learning needs, then you’re more likely to achieve the standards than you are if you’re going to insist that everybody go through the process in a similar manner.”

Changing a $26-billion system will not be easy, they say, but Morton and Tomalis relish tackling these challenges together—partly because they’re eager to advance Gov. Corbett’s agenda, but also because they make a good team.

“I knew our styles would complement each other,” says Morton. “His background is more on the political and business side; mine is more on the practitioner’s side. He has federal experience, and while mine is all in Pennsylvania, it covers all levels—classroom, district, intermediate unit, higher education.”

“Amy has a portfolio of experiences and a range of qualifications that you don’t see a lot,” Tomalis concurs. “I know the importance of that position, because I served in that capacity before. A cabinet member cannot be successful in implementing the governor’s agenda or the agency’s mission without a very capable number two. And that’s what she does.”