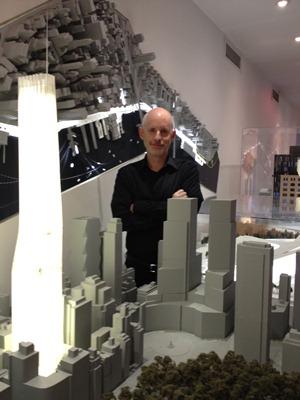 "The floor is dope. The arena is dope. It's a cool place to play."

This was the Washington Wizards' Trevor Ariza after playing against the Brooklyn Nets at the Barclays Center for the first time, and Christopher Sharples '87 lights up when reading Ariza's quote. Sharples is one of the founders of SHoP Architects, the group behind the Barclays Center's design, and it's clear that Ariza's reaction, one shared by anyone who has played there, brings him a lot of joy. "That's what it's all about," Sharples says.

With a career that includes projects such as the new home for the Brooklyn Nets, an innovation hub in Botswana, the master plan for a new science city in Kenya and, if the right cards fall into place, a spaceport, one might think Sharples grew up dreaming of building the next great structure to grace a skyline (or starscape). In fact, it took a trip abroad while at Dickinson to make the history and fine arts double major switch gears and pursue architecture.

During Sharples' junior year, he decided to go abroad to Bologna, Italy, and he met up with his uncle along the way. "He's an ex-pat who lived in a castle in Umbertide," Sharples says. "And he said, 'I don't understand why you aren't an architect: You're always making and designing things. You go to a great liberal-arts school and you study philosophy and language and all these other things. You'd be perfect as an architect.' " In a life-changing moment, Sharples decided right then on a new career path, and architecture is where he focused his energy. Sharples' year-abroad experience also sharpened his mind and broadened his perspectives, leading him to see the world, and himself, differently.

"It was after the first Libya crisis," he says. "I remember being in Agrigento, Sicily, and a few classmates and I bumped into two Libyans, and we had a real debate in front of the Temple of Juno. We really started to understand where each of us was coming from. It's that kind of dialogue that you can't get in the classroom."

Sharples teamed up with his twin brother William and some close friends from Columbia University, where he earned a master of architecture degree, to found SHoP Architects in 1996.

"We all came from liberal-arts backgrounds," he says. "For my part, Dickinson gave me the skills to be both a critical and creative thinker, giving me the confidence to come up with unique solutions for challenging problems," something that would certainly come in handy when designing a high-profile structures in a high-profile city such as New York. Being a good listener also helps.

"The architect's role is like the conductor of an orchestra: You have to bring the whole team together and orchestrate how the design will become real," Sharples explains. For the Barclays Center, the 675,000-square-foot centerpiece of the $4.9 billion Atlantic Yards project, Sharples and SHoP took the conductor's wand from Frank Gehry, widely known as one of the most important architects of our time and originally slated for the design work.

"After the [2008 financial] meltdown, the whole project had to change," Sharples says. "We called Mr. Gehry to get his blessing after we were recommended for the project by another New York architect. People were asking, 'Who can do this?' " and Sharples and SHoP stepped into the project.

"To us it was all about taking the energy of Brooklyn—its streetscape, its industrial history, the neighborhoods' surrounding colors and textures—and drawing them into the building's architecture," he says of the design. To that end, the building's skin is composed of weathered steel, whose rust patina not only gives the new arena a gritty industrial chicness but protects the structural integrity of the underlying steel frame. As SHoP worked on the exterior, the client approached Sharples about working on the interior spaces as well, which they also ended up doing.

Enter Jay-Z, the internationally known New York rapper who is a stakeholder in the Nets.

'The forks have to be heavy'

"Jay-Z is a smart guy," Sharples begins, "so when we started showing him what we were doing, he didn't immediately say, 'Well, I want you to design it this way.' He talked more about how he felt the experience needed to unfold. The first thing he said was, 'The forks have to be heavy,' and working with materials, we knew exactly what he was talking about."

What Jay-Z was talking about and what Sharples and his team immediately understood was that the Barclays Center needed substance-the weight and feel and texture of something as real as Brooklyn itself-in this particular case, reflected even in the choice of forks for the 40/40 Club, Jay-Z's upscale onsite club/restaurant.

With the Barclays Center now open to the public, Jay-Z's vision and SHoP's design have come together to form something that they hope the neighborhood will embrace more and more as the years pass. "It's a place not only to play sports but to hang out: a civic, urban experience that's only going to get better," Sharples says.

The future of SHoP

With projects always under way in the New York City area, SHoP's newest endeavors are taking Sharples and his team out of the country.

"Right now we're working on an innovation hub in Botswana for health sciences and next-gen solar," he says. "It's basically an incubator for tech companies. We were also recently awarded the commission to master plan a 5,000-acre technology city to be called Konza, located 60 km south of Nairobi, Kenya.

Also on the horizon is something truly otherworldly.

"Deep down, what we want to do next is something in aerospace," Sharples says. "We've taught studios at Yale, focusing on airports and spaceports, and I'd love to work on a spaceport. We've been asked to be a part of various teams, and we're pretty excited." If the success SHoP has found over the years is any indication, it won't be long before Sharples' excitement is transformed into working projects in space, his architectural vision reaching new heights yet again.