What Students Want to Know 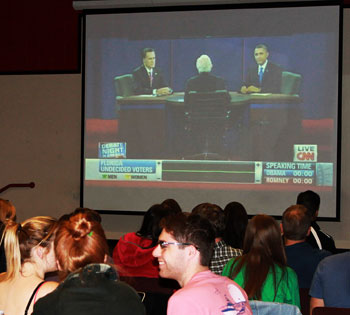 For many first-time voters, the first big election can be somewhat daunting. And since many of them enter this new realm of civic life while they are in college, Dickinson works hard to help smooth the process, holding on-campus registration drives, arranging for transportation to poll sites and even providing detailed information about the mechanics of registration and voting well in advance of election day.

These are helpful and important services. But what about the far more difficult task facing new (and not-so-new) voters—that of zeroing in on the essential points of each candidate's platform amid the cacophony of political news and commentary that floods the American media channels each day, so they can determine just how they want to cast their votes?

Dickinson's got that covered too. As professors weave the election and other topical issues into classroom discussions, administrators and professors also have presented an array of helpful educational lectures and debates, including an Oct. 24 panel discussion, What Students Want to Know.

Each panelist had been invited to the discussion by student leaders on polar sides of the political spectrum—the College Democrats and College Republicans—and after presenting dense, 15-minute overviews of their topics, they took questions from the crowd.

Roughly half of the questions revolved around the economy and deficit, and half addressed social concerns. A few touched on foreign policy.

"What's interesting is that, based on the questions raised, the issues that concern students most align perfectly with recent polls of the broader population," says Edlin, referring to a NBC News/Wall Street Journal poll revealing that 46 percent of Americans named the economy as the most important issue in this election, followed by social issues and values (15 percent). "So their thoughts reflect on what the whole country is thinking right now."

International-studies major Lauren O'Leary '13 and law & policy major MaKayla Hanington '13 report that while the televised presidential debates had left them with lingering questions, they emerged from the forum better informed. "I found that I disagree with one candidate's views on the social issues that are important to me, and this is what helped me make up my mind about who to vote for," Hanington says.

O'Leary particularly appreciated Wolff's presentation about Obama's and Romney's approaches to foreign policy. "A lot of the answers during the last presidential debate were brought back to domestic issues, so we really didn't get to hear the details," she explains.

Political-science major Peter Soeller '14, president of Students for Social Justice, also says that it was a satisfying experience. "The media's focus seems largely based on a candidate's popularity and persona. So I'm glad we have a venue like this that just focuses on the issues," he says.

As Edlin points out, this rigorous examination of the issues is important, not only because it helps students make informed choices for this election—and their votes can affect the course of history in the short term—but because early engagement builds a foundation for future civic life. "Studies have shown that if young people become engaged and create the habit of voting early on, they continue to vote throughout their lives," he explains. "We want to create good citizens."