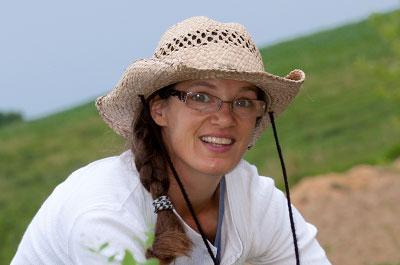 As director and manager of the Dickinson College Farm, Jenn Halpin champions the cause of local, sustainable agriculture in creative and life-changing ways. This weekend, her contributions as farmer, community leader and educator will be recognized on the national stage.

Halpin was recently named a Pennsylvania "Farmer Hero" by the Farm Aid organization. The nonprofit group  will hold its annual festival and concert at the Hersheypark Stadium this Saturday, and Halpin will play a distinctive role in that star-studded event.

This year's event will include a multi-headliner concert featuring performances by Farm Aid board members Dave Matthews, Nelson, Mellencamp and Young; a HOMEGROWN Village educational expo; a local-foods concession; and a pre-concert press conference, designed to bring agricultural issues into the limelight.

Halpin is one of three noted farmers who will appear on the press panel along with Live Aid's famous board members. She also will join Assistant Farm Manager Matt Steiman in co-presenting a hands-on composting workshop, while the College Farm's four apprentices—all members of the class of 2012—present an interactive display about soil.

Julie Vastine, director of the Alliance for Aquatic Resource Monitoring (ALLARM), also will be part of the Farm Aid festival. She will present at a Farm Aid Forum about the impact of shale-gas extraction on the family farm.