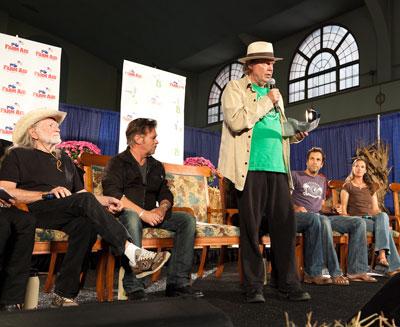 Most days, you'll find Jenn Halpin spreading the word about farm education across campus and in the community through interdisciplinary classes, workshops and special events. Or she might tackle the subject hands-on, her fingers in the dirt.

But on Sept. 22 Halpin took that message to the national stage, alongside some very high-profile fellow advocates.

Named a Pennsylvania "Farmer Hero" by the national Farm Aid board, Halpin was one of three farmers invited to sit on a press panel—along with celebrity board members Willie Nelson, John Mellencamp, Neil Young and Dave Matthews—as part of the 2012 Farm Aid festival. The daylong, sold-out event, which featured concerts by dozens of artists and educational displays by fellow Dickinsonians and other  family-farm advocates, attracted 33,000 ticketholders and hundreds of farmers from across the nation.

Passionate about the cause

Farm Aid was founded in 1985 by Nelson, Mellencamp and Young to raise awareness about disappearing American farmlands and to raise funds to promote family-farm-related policies and campaigns, including the buy-local and good-food movements. Over the years, the nonprofit organization has raised $40 million in support of these causes. Most of the funds are generated at the annual festival, held this year in Hershey, Pa.

The 2012 event attracted many ardent supporters and volunteers. Debbie Seale of Virginia is a third-generation farmer who has proudly volunteered for each of the past 17 Farm Aid festivals. "We're all passionate about this, and we're in it for the long haul," she asserted. "Too many people still don't know where their food comes from."

"We want to do our part to help save the farmlands in this country," added Jenna Loverro, a nonfarmer who volunteered to help set up the event with partner Leif Erikson. "Much of it has been lost to overdevelopment. We're just watching it disappear."

Halpin, an equally passionate advocate of locally based agriculture, was invited to take part in the festival because of her work as Dickinson's College Farm director, a position she co-created in 2007.

A graduate of Providence College with degrees in political science and German studies, Halpin helped build family farms in West Africa as a Peace Corps volunteer and, on her return to the U.S., apprenticed under biointensive farming pioneer John Jeavons. She accepted a position as student-garden coordinator at Dickinson in 2002. When her lease on a nearby farm ended suddenly, Halpin went in search of other land and learned that Dickinson owned a 50-acre farm that was then not in use. She and Assistant Farm Manager Matt Steiman developed a proposal to use the farm as a learning laboratory that would weave hands-on, sustainable-farming education into coursework across the curriculum. The College Farm program was born, and it has been expanding exponentially—and attracting growing attention—ever since.

At the festival, Halpin, Steiman and fellow Dickinsonians did what they do at the farm each day: educating others about local, sustainable agriculture. Steiman presented a workshop about composting, and the College Farm's four apprentices, class of 2012 members Anna Farb, Daniel Grover, Scott Hoffman and Claire Persichetti, gave an interactive presentation about the makeup of healthy soil. Julie Vastine, director of the Alliance for Aquatic Resource Monitoring (ALLARM), and environmental-science major Courtney Blinkhorn '13 participated in a Farm Aid Fracking Forum on Friday, where they spoke about ALLARM's shale-gas monitoring work.

In all, the presentations and workshops led by Dickinsonians and others reached thousands of festivalgoers. But it was Halpin's statements at the national press conference that reached the widest audience.

Halpin and her fellow panelists spoke passionately about the need to support the legacy of family farming.

Nelson, the president of Farm Aid Inc., struck a somber tone when he told the roomful of journalists and volunteers that the problems family farmers face in the wake of the rise of corporate farming "should have been solved many years ago." But, he added pointedly, "We're not going to stop until every family farmer thrives and everyone has access to good food from family farms."

Matthews, who owns a farm in Virginia, encouraged attendees to buy local food whenever possible and lamented the political sway that he said the wealthiest Americans have over current farming policy. "It's the opposite of where most of us want to be," he said, adding that America was built on democratic ideals. "If everyone's doing better, we're all doing better."

Young drew thunderous applause when he declared the virtues of a farming career and stressed the need to organize, "so farmers have a big voice." He said that education is paramount to securing the future of local farming.

Halpin agreed, and offered hope for the future. "My goal is to help grow the next generation of farmers," she said. "I work with the students and show them that [farming] is hard work, but it is work of integrity."