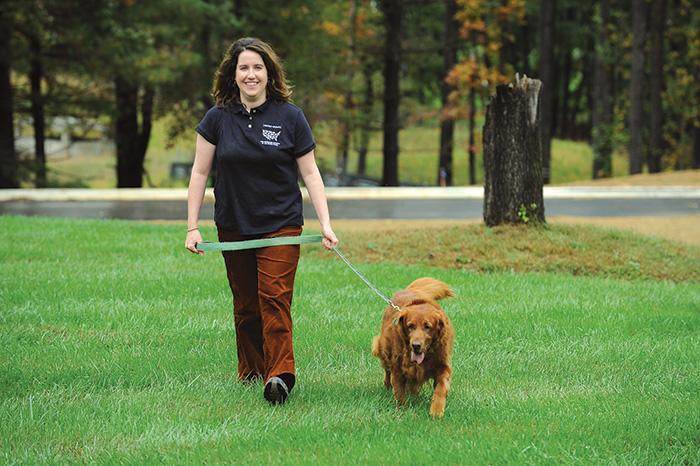 A Florida family wakes on Christmas Eve morning in 2008 to the piercing wail of coyotes being torn apart by a pack of dogs. From their house, the mother, father and children see the dogs snapping and snarling at the cornered coyotes in a fenced enclosure in their neighbor’s yard. Horrified, the family decides to put a stop to the practice, which is known as fox and coyote penning. But they soon find out it’s actually legal and widespread, with up to 50 pens in Florida alone. What can one family do to fight something so big?

A lot, according to Casey Pheiffer ’04, director of wildlife abuse campaigns for the Humane Society of the United States.

“Most people don’t understand the incredible influence they’d have if only they would get involved,” Pheiffer explains. “I think people can get intimidated by the policy process, but just by picking up the phone and calling your representative, just by telling your story, you can help make a change.”

Pheiffer works with concerned individuals to raise awareness and influence policy changes on fox and coyote penning, poaching, captive hunting and other instances of wildlife cruelty. That means connecting people like that Florida family with the state game commissioners and representatives who need to hear their stories in order to change or enforce laws that protect animals.

“The Humane Society is the largest, most effective animal-protection organization in the country,” explains Pheiffer, who has been working at the Humane Society’s national headquarters in Gaithersburg, Md., since 2005. “We’re backed by more than 11 million members—that’s one in every 28 Americans … I feel very lucky that people take time out of their day to speak up for animals. Without them, I wouldn’t be able to do what I do.”

In this case, what Pheiffer did took nearly two years and involved many different moving pieces. She needed to get the word out to thousands of Humane Society members in Florida, encourage wildlife agencies to investigate the illegal sale of coyotes and foxes across state lines, bring together witnesses and legislators, and research Humane Society records on the history of the issue and how other states address it.

Tackling such a complex challenge, she says, drew on her lessons as a policy-studies major at Dickinson. “I knew from an early age that I wanted to devote my career to helping people or helping animals,” says Pheiffer. “The great thing about Dickinson is that my coursework, my professors, my friends, everything I did, helped me learn how I could actually do that. Dickinson taught me the building blocks of policy making, the tools you use to make policy. That’s what I think about on a daily basis.”

Though Pheiffer is still working to end fox and coyote penning nationwide, her efforts in Florida have already paid off. A 2009 Florida Fish and Wildlife Conservation Commission investigation led to the arrests of a dozen people for selling foxes and coyotes to stock pens. The next year, as concerned citizens across Florida joined the campaign to end the practice, the commission outlawed fox and coyote penning, shutting down all 50 pens in the state.

“In my job I encounter some of the worst things people are capable of,” Pheiffer says. “But I can go to sleep every night knowing that I worked with some of the best people to fight those terrible things and put an end to them.”