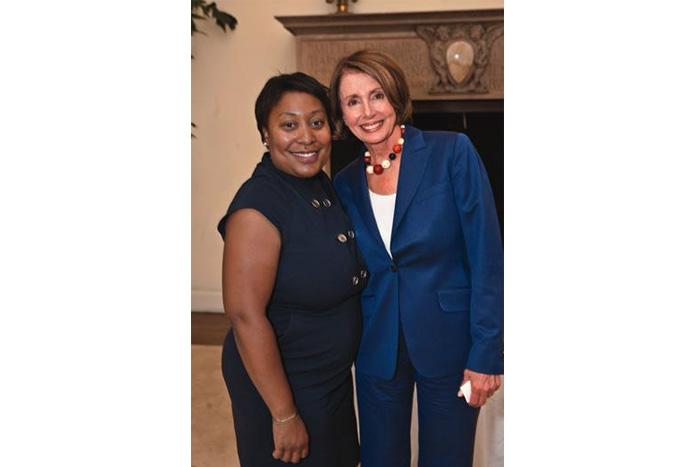 Gwyneth Borden '95 met up with U.S. Rep. Nancy Pelosi (D-Calif.) at an IBM Women in Leadership event that Borden organized.

It’s the best of both worlds for Gwyneth Borden ’95, manager of corporate citizenship and corporate affairs for IBM’s northwest territory. Borden provides nonprofits with everything from software to trained volunteers.

“The mission within [IBM’s] corporate citizenship is making the world a smarter, better, brighter place,” said the policy-management graduate who lives and works in San Francisco.

In general, IBM focuses its community-support efforts on societal issues such as the environment, economic development, education, health and literacy. In these areas, rather than simply making cash donations, employees apply their talents, and the company offers its technology to solve problems.

As a global company with offices in 170 countries, IBM understands the importance of being engaged in the communities where its employees live and work. Most of its programs are global in scope, but there are country-specific initiatives that address critical local issues.

Over the last decade or so, according to Borden, the general public has increasingly demanded that all companies become more responsible for doing well financially by doing “good” morally and ethically.

IBM strives to be a good citizen of the world in a variety of ways, Borden points out. There’s IBM MentorPlace, an online volunteer portal where employees can connect with teachers and students. There also is the Corporate Service Corps, where IBM’ers help communities and organizations in emerging markets while developing their own leadership skills.

Borden said that it’s been documented that employees, especially new hires, are willing to work for less money if that company is doing good in the world.

Her own path to IBM and corporate citizenship has not been a deliberate one to a “super-defined profession,” Borden said.

She credits her broad Dickinson education with allowing her to explore diverse interests. “I’m not so stuck in a specific field. It’s been a fascinating journey.”

Right out of college, she worked on Capitol Hill, then for the family foundation of the Rockefellers. Next she worked at a public-affairs firm in San Francisco and then local government as a legislative aide to Mayor Gavin Newsom, who was then a member of the San Francisco board of supervisors. Before joining IBM in 2003, Borden was director of government and community relations for the San Francisco Chamber of Commerce.

Beyond her work with IBM, she continues to be a public servant as a member of San Francisco’s Planning Commission, a demanding role she took on in 2008.

This appointed board meets weekly to determine growth and development in San Francisco by voting on entitlements that include the right to develop property, building permits and conditional use. Unless these decisions are appealed or require a legislative “fix,” these votes become law.

“I really enjoy it,” she said. The commission oversees billions of dollars in real-estate entitlements annually, shaping the way the city looks and feels, which makes it the “most powerful commission in the city.”

One of the distinctive characteristics of San Francisco is how engaged citizens are about everything, Borden said, which means her meetings can be intense with a short agenda lasting six hours. For example, a discussion about one item, such as an “AT&T cell tower can go on for two hours, and you need a Chinese translator.”

Borden is leaving the “door open” on running for office and said that the planning commission is the best training for elective office in San Francisco. “On a weekly basis, I piss off friends. … Planning issues are very personal,” she said.

Borden always has been politically minded. At Dickinson, she was elected to Student Senate, serving as president her senior year. Senate gave her a taste of office because the group was responsible for allocating student fees to campus clubs and groups.

“I always wanted to make the world a better place,” Borden said. It was the reason she became a policy-management major, and with IBM, she has found a way to make things better.