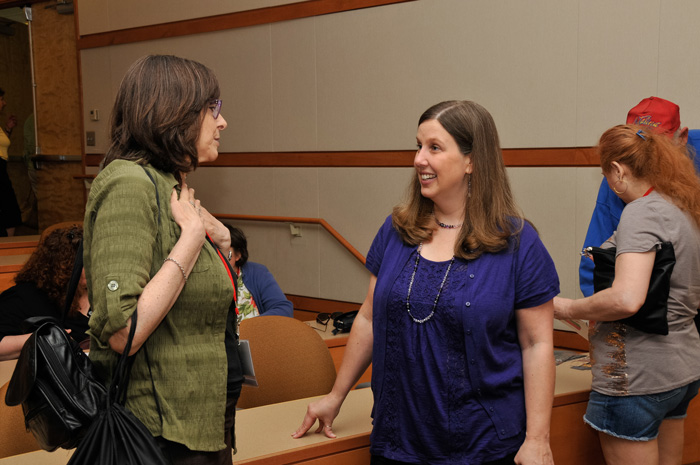 The next time you're puttering around your kitchen cleaning up after dinner, think of Laura Croghan Kamoie '92. One night four years ago, as she was unloading the dishwasher, she stood up and banged the top of her head on the corner of an open cabinet door. This led to a surprisingly serious head injury, but what the injury led to is even more surprising.

"When I recovered, I had a very strong urge toward creative pursuits," Kamoie explains. "I was laid up for a bit, and I read the whole Twilight series and thought, 'Hey, I can do that!' And I started writing my first novel, the vampire romance Forever Freed. Talk about a silver lining!"

The silver on that lining got a little thicker this week, when Avon Romance, an imprint of HarperCollins, entered into a four-book deal with Kamoie—a six-figure contract that secured world publishing rights for Avon, moving Kamoie to the top of their roster. When the news reached Kamoie, who writes under the pen name Laura Kaye, what came over her was, she says, "complete and utter shock and disbelief. The deal was beyond anything I expected, and I just kept asking my agent, 'Why? How? Are you sure?' It was an incredible moment."

Ghosts, evil-eyed curses and angels … and the U.S. Naval Academy

"Growing up, my family believed in the supernatural," Kamoie says, "and we used to sit around my grandmother's kitchen table and listen to everyone's stories about ghosts, evil-eyed curses and angels. This led to my interest in all things supernatural as a reader, and so it was natural that I started writing there too."

While she wrote as a child and as a teenager, and even won a few awards along the way, Kamoie became interested in becoming a historian and a college professor, and her writing projects turned to nonfiction.

"I was a history major at Dickinson, so my major was directly relevant to the profession I have pursued for most of my life," she says. "I wasn't as involved with extracurricular writing in college—lots of other things, but not writing. But now that I'm writing fiction, I still find my historical training relevant in my use of writing and research skills."

Kamoie teaches American history at the U.S. Naval Academy, a setting that probably couldn't be more different from the worlds she creates, but connections still exist between the two.

"In one way, fiction writing is a big leap from my college teaching," Kamoie begins. "In another, it's a continuation of what I've been doing my whole life—telling stories."

And she has a lot of storytelling ahead of her with the four-book deal, which will comprise a series following a group of former military men who are, the publisher says, "all willing to do anything necessary to protect their women and the comrades they fought with."

While the romance novel may seem to be a new addition to the Zeitgeist, Kamoie places herself and recent additions to the genre in context. "Romance has actually been the bestselling genre fiction for a number of years now, so Fifty Shades of Grey built on an existing trend and accelerated it," she explains. "As a genre, it appeals to readers because the stories are usually filled with triumph over adversity, hope and happily-ever-afters. Romance tells readers that, even when they think all is lost and they'll never find that place where they belong in the world, it can come along when you least expect it. Plus, they're just plain fun to read."

They must be fun to write as well, because Kamoie is busier than ever, and her next book, One Night With a Hero, a contemporary romance with a military leading man, will be released Oct. 20. One Night is the follow-up story to her spring release, Her Forbidden Hero, which hit both the Amazon and Barnes & Noble Top 100 bestseller lists.

Meanwhile, Kamoie is in the middle of two paranormal series: the Hearts of the Anemoi (at Entangled Publishing), based on Greek mythology, and the Vampire Warrior Kings series (with Harlequin), both of which will have spring 2013 releases.

Between her teaching, research and fiction writing, Kamoie spends time with husband Brian '93 and their two daughters. "When I'm not at work or writing, I'm usually doing family things," she says. "I've also given up a lot of hobbies I used to have, like watching TV, to make more time for writing."