Sex Study in the Crosshairs 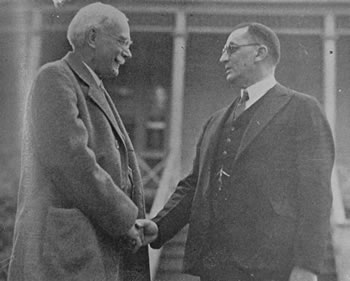 It's the stuff educators both relish and dread—that edgy student-research proposal that might be groundbreaking or simply provoking. Will it generate new knowledge, or will it just scandalize the institution?

These may have been some of the questions swirling about Professor Wilbur Norcross' mind as he surveyed a sex-research proposal submitted by two psychology students in spring 1933. And the correspondence he struck up as a result offers a snapshot of a curious moment in both scientific and Dickinsonian history.

The students' proposal centered on a psycho-galvanometer—a precursor to the more sophisticated polygraph machine (see sidebar)—that the psychology department had recently acquired. Jack Frederick Gothi '34 and Robert E. Syster '33 were eager to test-drive the device and hoped to begin their project in the fall.

The machine would measure the sweat on the surface of test subjects' skin as the subjects were exposed to a variety of scintillating materials.

According to the proposal, the first set of volunteers would review 10 "suggestive, but not vulgar" nude photos, five male and five female. The next group would read "extremely suggestive" sex stories. (In a letter describing the research, Norcross was quick to clarify that the stimulus the students used would have literary merit—perhaps Shakespeare—and that the photos might be "such as appear in The New Yorker.") The final group would listen to three records: Harlem Moon, St. Louis Blues and Frankie and Johnny. The student-researchers also would pose a series of questions to each subject, ranging from the relatively tame ("Do you enjoy necking?") to the eyebrow-raising ("Would you be willing to share your husband or wife?").

Norcross, a class of 1907 alumnus, Methodist minister, dramatics coach and war veteran who prided himself on both his Christian faith and his scientific empiricism, was presumably open to new ideas, having spearheaded the establishment of Dickinson's psychology department two years earlier. But this was 1933—15 years before the publication of Alfred Kinsey's groundbreaking Sexual Behavior in the Human Male. He may not have wanted to make this call on his own, particularly with a new college president in Old West.

Unfortunately, Dickinson's Institutional Review Board (IRB) system—a process by which a governing body reviews research proposals to ensure human test subjects' rights and safety are protected, and that any potential dangers are commensurate with projected benefits of the research—was still decades away. So, in an unconventional move, Norcross looked for an authority who could take this racy proposal off of his plate.

The new president was more than qualified to fill the bill.

Reportedly the first Dickinson president who was neither alumnus nor minister, Karl Tinsley Waugh was born of American parents in India and earned his Ph.D. in philosophy at Harvard University, where he was an assistant to William James. He served as major and chief psychological examiner during World War I and as psychologist for the Surgeon General's office in Washington, D.C., and also taught philosophy and psychology at Beloit College, Berea College and the University of Southern California (USC). He was appointed dean of USC's College of Arts and Sciences in 1923.

An accomplished scholar in an emerging field, Waugh was not adverse to studying subjects that some might find frivolous or questionable. According to a 1931 publication from Long Island University, Waugh collaborated with the Academy of Motion Picture Arts and Sciences to develop "the first course of study in the technique and art of motion pictures" at a time when "talkies" were in their infancy. He also enjoyed dramatics of a more scientific sort; a 1915 Evening Sentinel clipping reported that Waugh claimed to have cured a young woman's ailments through "hypnotic suggestion," bringing her "out of total blindness and stammering."

This pioneering outlook must have impressed the Board of Trustees, which unanimously nominated Waugh to his post as Dickinson's 19th president in October 1931. In his first year at Dickinson, Waugh instituted or proposed "scholarship loans" in place of traditional scholarships, opening the doors to Dickinson for many additional students; enrollment for the incoming freshman class was reportedly the highest in the college's history.

According to documents by faculty members and students in 1933, Waugh also "planned a new system for avoiding the longstanding evils of fraternity rushing, … urged the introduction of a budget system" and advocated for curriculum revisions "in line with modern standards," among other ideas that might seem familiar to higher-ed administrators today.

This innovative spirit would lead us to expect Waugh to be open to, and interested in, the students' proposal. But his response was less than enthusiastic.

In an April 11, 1933, letter to Norcross, Waugh argued that an evaluation of the research proposal should hinge on the students' intent, and that if the experiment were simply an excuse to use the psycho-galvanometer, it was, in his opinion, a waste of time. Then his arguments began to unravel, as he argued that work of this nature had already been accomplished many times before.

"This was pre-Kinsey, and it was his work in the 1950s that made sexuality a somewhat-acceptable object of scientific inquiry," says Associate Professor of Psychology Megan Yost, who specializes in the field. "Theorists, philosophers and psychoanalysts had been talking about sexuality at this time, but no one was doing research on sexuality in that time period." So while the fact that Waugh denied the study is hardly surprising, his reason is suspect: If the students sincerely aimed to find new information, chances were good that they might find it on this still little-traveled, and therefore, potentially fruitful ground.

Waugh conceded that if the students were enrolled in Norcross' experimental-methods course and were actively studying these specific notions, they could go ahead with their research—but only with curious alterations, given the nature of the work. "I would suggest for the purpose the use of stimuli somewhat less lurid," he wrote, adding that the photographic, literary and musical stimuli—gleaned from mainstream publications, classical texts and popular recordings—"were probably not intended for boys."

That's a curious statement to make about Shakespearian passages and magazine photos. And while these objections reflect the anxieties of both his era and his post, they also illuminate a failure to see the forest for the trees, says Associate Professor of Psychology Andy Skelton, chair of the Dickinson College IRB.

"There was a strong feeling during this era that sex surveys interfered with people's privacy, and the concern was not just whether the person would be physically hurt, but also the risk of anyone finding out the information and using it in some way to brand the subjects," Skelton says, adding that while it's difficult to imagine any harm that would befall a modern, psychologically healthy participant in this racy study, the absence of a conversation about possible risks this study could pose is noteworthy, given societal views toward sexuality in that day.

"Neither Professor Norcross' request nor President Waugh's response raises at all the issue of protecting the research participants from harm," Skelton continues. "Instead, the matter seems to turn on the propriety of the stimuli and the scientific value of the exercise. It seems to me that the issue here is not about protecting students from dangerous materials, but about the institution saving face."

So why would this psychologist and academic pioneer proceed so cautiously? It's possible that he simply felt that the topic wasn't dignified or worthwhile, or that he suspected that the students' intentions weren't serious. Or it may have been due to the political tenor of his presidency. If any college president had reason to be distracted and nervous in the spring of 1933, it was Waugh, a man at the cusp of a scandal that would extinguish his higher-education career.

When Waugh was inducted as Dickinson's 19th president, the college was in turmoil. Dickinson's 18th president, Mervin Filler, class of 1893, had died suddenly the previous spring, and Filler's retired predecessor, James Henry Morgan, class of 1878, had temporarily taken the helm. The board's stated intent was to find "fresh blood" to usher Dickinson out of administrative crisis and move the college boldly forward.

And Waugh delivered, though perhaps not in ways that the board had foreseen.

Despite his glowing admissions numbers and popularity with students, Waugh would be forced to resign just weeks after writing his letter to Norcross, and just 18 months into his post. The resignation would ignite a highly public dispute between Waugh, Morgan and the Board of Trustees. (According to the board, Waugh left willingly. According to Waugh, he was forced out by a small group of dissenters led by Morgan, who would again fill the presidency until a new president could be named.)

In an open letter to the administration and board, published on the front page of the Harrisburg newspaper, Waugh demanded an apology. The letter states that Waugh was accused of financial improprieties, which was later disproved, and of "fixing" the minutes to a faculty meeting to suit his purposes—a claim that one faculty member later retracted.

The scandal even was referenced in a Feb. 7, 1934, issue of The New Republic Magazine. According to The Dickinsonian, The New Republic pointed "an accusing finger at Dickinson," telling tales of "faculty being intimidated" and an overall "deplorable situation." A letter of recommendation for Waugh, signed by approximately 400 students, would soon be drafted.

Looking back, looking ahead

We'll never know whether this harried president's letter actually squelched the students' research proposal, because the trail ends here. We can't even place the proposal in proper context, because there are no surviving records of departmental-equipment purchases or of the approved research topics at the time.

"About the only thing we can say for sure is that what captured the attention of undergraduates in 1933 isn't that markedly different from that which captures the attention of young people today," says Skelton. "And at the very least, it's an interesting and amusing read."

We also can say with some certainty that, for whatever reason, the man deemed too progressive for the college's good in 1933 was not quite liberal enough to approve a little racy Shakespearean reading and New Yorker-photo viewing in sex-study context, regardless of the students' intent. The fact that one is forward-thinking in one area does not guarantee one's revolutionary spirit in all matters.

But lest we become too sanctimonious about the prudishness of an earlier era, Skelton has some words of advice. "You can't be too judgmental about people 80 years ago being people of 80 years ago," he cautions. "Fifty years from now some of the things we do will be looked at wryly by our heirs."