Extreme and Quite Surreal 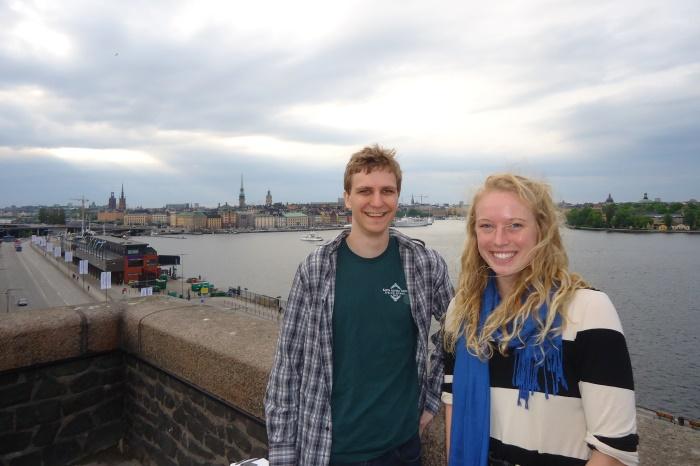 In early April, Phoebe Oldach '13 and Liam Timms '13 received an e-mail that began like this: "I am delighted to inform you that you have been nominated by your faculty mentors to participate in a very special opportunity for young scientists in Stockholm, Sweden, on May 28 and 29 of this year!"

The opportunity was a Molecular Frontiers symposium and youth forum called Exploring the Boundaries: The Science of the Extremes, sponsored by the Royal Swedish Academy of Sciences, the scientific body that awards the Nobel prizes in chemistry and physics.

"I was blown away by the e-mail," says Oldach, who was preparing to graduate with a degree in biochemistry & molecular biology when the message landed in her inbox. Calling the idea of jetting off to Stockholm for the event "quite surreal," Oldach says, "I was excited, especially because it was an absolute surprise to me—I had never applied, ... never even heard of Dickinson sending students before. So it was really a wonderful shock."

Oldach had never heard of Dickinson students attending the symposium before because she and Timms, a physics major, were the first—the first to spend time mingling with Nobel committee members and laureates, NASA astronauts and a professor from the Niels Bohr Institute and Centre for Star and Planet Formation, among others. And the significance of the topics at hand was something she was already primed to embrace.

"The topic of science at the extremes is something that perhaps becomes more and more important as our planet gets hotter, oceans more acidic, the environment more polluted," says Oldach, who will be heading to India next year to work in a lab at the University of Delhi. "In this context, it's interesting to study extremophiles [organisms that can live in generally uninhabitable places] to determine what adaptations make them capable of surviving harsh environments and to use this knowledge to reflect more on how life on Earth will change if the current patterns of environmental change continue."

Oldach found that being a part of the symposium—alongside scientists whose papers she has read, whose discoveries are included in the textbooks she studies—meant more than just attending lectures, as Molecular Frontiers' Lorie Karnath introduced Oldach and Timms to attendees and arranged for them to attend lunches and dinners with the speakers and guests.

"It was incredible to meet in person so many scientists whose explorations splash across the news," Oldach says. "The speakers were all overwhelmingly encouraging … and infectiously passionate about their fields, which ranged from Martian geology to quantum physics to the search for extremophiles in ocean vents. There is so much more to learn and many more years of school in my future."

For more on Oldach's Stockholm experience, explore her blog,  Down the Rabbit Hole.