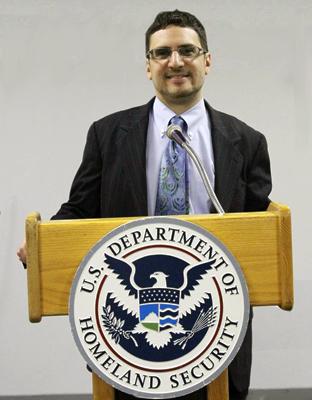 In matters of national security, no news is generally good news, so when an official from the Department of Homeland Security comes calling, they inevitably kick up a flurry of anxiety. But Ted Merwin, associate professor of religion and Judaic studies and director of the Milton B. Asbell Center for Jewish Life, had nothing to worry about. The feds just wanted to chat over lunch. Or, rather, about it.

Merwin, a scholar of Jewish history and pop culture, is the author of a forthcoming New York University Press book about the history of the Jewish deli in America. His expertise has brought some interesting speaking engagements this month, as national organizations and associations invite him to help them celebrate National Jewish American Heritage Month.

So far Merwin has traveled to Philadelphia to talk turkey with food-service leaders, to Capitol Hill to dish with members of a national organization for young CEOs and to New York to deliver food for thought to the homeland-security crew.

At each stop, Merwin offered insight into the cultural significance of the piled-high deli sandwich, a quintessentially American meal that found inspiration in the smoked meats of Germany, took root in Jewish-American soil and eventually became part of the greater American foodscape. “Meat was a luxury for poor European Jews who came to America in the early 20th century, and for the children of these immigrants, the ability to eat these overstuffed sandwiches was a way of showing that they had accomplished the American dream,” he explains. “And by the mid-century, cold cuts were mass marketed, and it became everybody’s food.”

Merwin also spoke about the importance of the deli as a meeting place for 20th-century Jewish Americans—a secular gathering spot where an increasingly secularized Jewish community could join together outside of the synagogue—and peppered his lectures with morsels about the role of the Jewish deli in music, stand-up comedy, television and film.

Asked if he tailored each talk to the organization, Merwin admitted that it was challenging to find links between pastrami sandwiches and homeland security. In the end, he made do with an anecdote about a corned-beef sandwich that had been smuggled onto a space shuttle and a bungling spy’s attempts to order a deli lunch in Hebrew during a sting.

“It didn’t exactly correlate, but it was the best I could do,” he says with a laugh. “To my knowledge, there haven’t been any sandwich-related national-security incidents.”