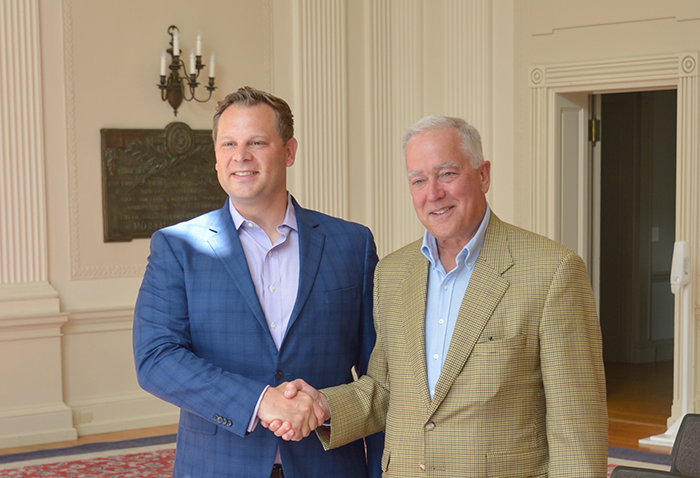 Robert Steele ’02 and his parents laid out the financial-aid forms on the kitchen table and took a deep breath. “It was overwhelming,” says Steele, the first in his family to attend college. “Everything about navigating the college admissions process was as intimidating as it was unfamiliar.”

It was the first of many barriers Steele would face on the road to his college degree. Now, he’s on the other side—he works with colleges and universities and has several degrees to his name. And he’s establishing a scholarship fund to help mitigate one of those barriers for hard-working first-gens with demonstrated financial need.

In high school, Steele was a good student and a multi-sport athlete, voted by his classmates as the "best all-around" student.  He felt nervous and a bit guilty about going away to college and not earning a salary right away. But his parents supported his dream. One day, then Head Football Coach Darwin Breaux visited Steele’s high school and invited him to an overnight campus visit.  Steele loved the campus and the people he met, and he submitted his Dickinson application on the spot. But it wasn’t until he learned about Dickinson’s generous financial-aid package that he enrolled.

“There was constant financial pressure,” he remembers. “So my scholarship and grant were definitely the deciding factor.”

The first semester was harder than expected, both academically and socially. Steele worked hard to stay afloat. “People would say things like, ‘My dad told me about this experience he had in college,’ or ‘we went to Paris last summer.’ It just seemed like everyone else knew so many things that I didn’t,” remembers Steele, who had not only never heard the word “internship,” but also didn’t have a network to help him secure one.

The challenge became visually apparent during his first JDS Scholar reception at the Historic President’s House. Steele arrived in a T-shirt and shorts. All of the other male students wore khakis, dress shoes, button-downs and blazers—most of which he didn’t even own. And when someone offered him an hors d’oeuvre, he wasn’t quite sure what to do.

Steele listened and learned. He got involved with Sigma Chi and the football team. He attended more campus events. And by spring, it had clicked. “The Dickinson experience was inspiring, and I became more confident that I could navigate the world better because of this environment. It served as a transformative social and professional elevator for me,” he says.

Steele studied abroad for a summer in England and served a junior-year internship semester in Washington, D.C. In 2000, he met his future wife, Melissa Brown ’00. He went on to earn advanced degrees, and after working in higher-ed communications, he shifted to education technology. He now serves as VP of the higher-education team at Workday, Inc.

But was it worth it?

Steele established the Steele Family First Generation Scholarship Fund to help make a Dickinson education possible for first-gens with demonstrated financial need. It’s named in honor of his parents, whose love and support were essential to his early successes, and also in hopes that his daughter, Avery, will one day continue this work. He hopes to be in touch with Steele Family Scholars, sharing advice and helping them build up a professional network.

The scholarship is not simply an acknowledgement of the ways Steele’s Dickinson experiences paved the way for his successful career. It’s also Steele’s way of communicating the value of a college education in general—and a Dickinson education in particular—to families sitting at the proverbial kitchen table together, with an overwhelming amount of application forms before them, wondering if a college education is worth it.

“I’m here to show them that it is, indeed, worth it,” he says. “We know that the Dickinson education creates doers who know how to think critically, communicate effectively and consider multiple points of view, and that the Dickinson community inspires students to go out there and conquer the world. When you combine the benefits of a Dickinson education with the work ethic and positive attitude of a first-gen, that’s a powerful combination. ... That’s just the kind of engaged citizen-leaders we need in our world today.”