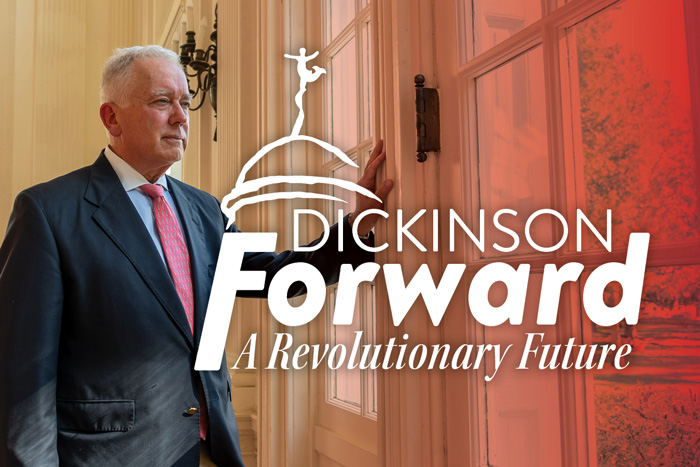 Interim President John E. Jones III '77, P'11, will announce the first initiative in the Dickinson Forward: A Revolutionary Future project via video announcement on Monday, Nov. 1, at 12:30 p.m. (Eastern Time). The announcement will be simulcast on the college’s website as well as its Facebook and YouTube pages to give the entire global Dickinson community the chance to join in.

Announced by Jones this summer, Dickinson Forward is a multifaceted initiative to position Dickinson for even greater excellence in the future. “Dickinson provides a world-class education that produces leaders, and I am incredibly proud to be a Dickinsonian,” said Jones when he launched the effort in July. “We are an institution on the move, and I want to get started immediately to continue that momentum and expand Dickinson's success.”

The collegewide Dickinson Forward program will incorporate a new strategic planning process as well as several strategic initiatives the college will launch over the coming months and years. The Nov. 1 announcement will unveil the first of those initiatives. During the coming weeks, all members of the Dickinson community will be provided a direct link to the video announcement and invited to tune in.