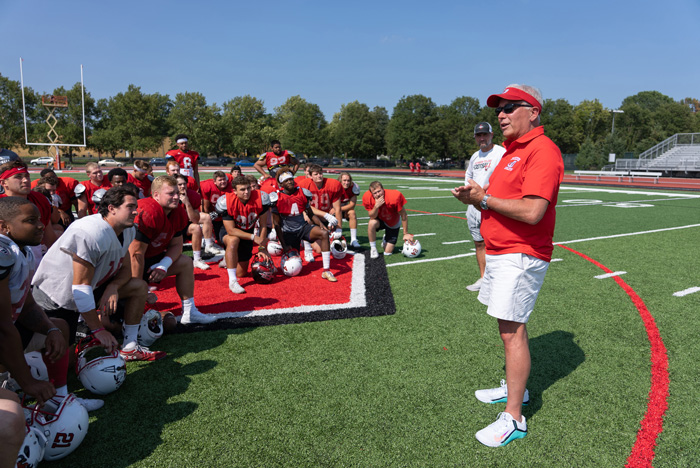 John E. Jones III '77, P'11, who visited football practice this week, will be one of the "celebrity" shuttle-bus driver for the team's home opener Saturday, Sept. 4. Students needing a ride to Biddle Field can head over to the ATS parking lot any time between 11:45 a.m. and 1:15 p.m. for a lift. Photo by Dan Loh.

For the first time in nearly two years, fall sports return to campus at Dickinson, with a full slate of Red Devils action through the weekend and beyond. From the nationally ranked women’s soccer team taking the field to a tailgate and “celebrity” shuttle-bus drivers for the football home opener, there’s plenty of ways for students to enjoy and cheer on Dickinson athletics in the coming days.

“The beginning of a new athletics season is always an exciting time, but this fall seems a little more special than in the past,” says Director of Athletics Joel Quattrone, noting how the COVID-19 pandemic disrupted with college sports over the last year and a half.

The action kicks off Thursday, Sept. 2, when the field hockey team takes to the pitch to face the 8th-ranked Messiah College Falcons at 4:30 p.m.

Two days later, Dickinson football finally gets back on the Biddle Field turf when the 17th-ranked Randolph-Macon College Yellow Jackets invade Carlisle for a 1:30 p.m. Saturday kickoff. To help bring as many students out to the game as possible, interim President John E. Jones III '77, P'11 will be serving as one of the “celebrity” shuttle-bus drivers, taking students from the Anita Tuvin Schlechter Auditorium (ATS) parking lot to the Belvedere entrance to Biddle Field from 11:45 a.m. to 1:15 p.m. The first home football game since November 2019 also will feature plenty of gameday swag giveaways, a raffle to win a pair of Beats headphones and a pregame tailgate on  the field behind the Biddle Field complex for all students and fans. 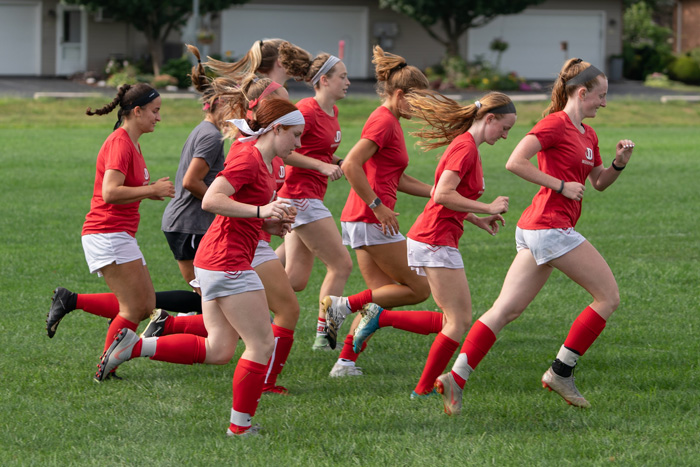 The women's soccer team, ranked No. 13 in the nation entering the fall season, gets ready to hit the pitch.

The 13th-ranked Red Devils women’s soccer program is the next team to have a home contest, on Wednesday, Sept. 8, at 6:30 p.m. against the Susquehanna University River Hawks in a non-conference clash.

The last two teams to have their on-campus home openers are volleyball and men’s soccer, both on Wednesday, Sept. 15. The men’s soccer team hits the pitch at 7 p.m. for a showdown with the 9th-ranked Messiah College Falcons, while at the same time volleyball battles the Bison of Gallaudet University.

Dickinson’s men's and women's cross country teams get their home slate off and running on Friday, Sept. 10, with the Little Three Championship at Dickinson Park, beginning at 6 p.m. On the golf course, the men host their home fall invitational during Homecoming Weekend, on Saturday, Sept. 18, while the women hit the course a week later on Sept. 25.

“Permitting fans to attend the contests, along with the incredible energy supplied by our student-athletes, coaches and staff will create a great atmosphere to be a part of,” says Quattrone. “We look forward to seeing you all supporting Red Devils athletics!"