How Not to Blend In 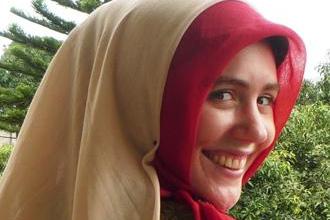 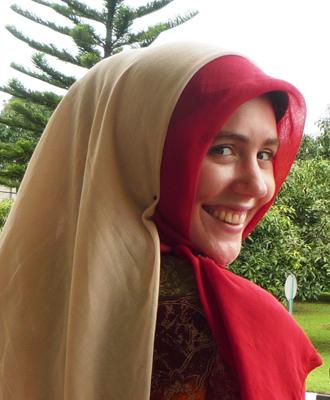 Kathryn McNamara '11 taught English at an Islamic school in Indonesia last year through the Fulbright ETA program. It's all part of her mission to help build bridges between America and the Islamic world.

As a Fulbright English Teaching Assistant (ETA) in a remote village in Indonesia, Kathryn McNamara ’11 wore a headscarf in public, partly to show respect for her Muslim neighbors, coworkers and students, and partly in a futile attempt to blend in.

“Most people had never seen an American before, and they had a lot of questions,” said the red-haired, fair-skinned McNamara, relating that a two-year-old once burst into tears at the sight of her, because she assumed McNamara was a ghost. “I would walk down the street to go buy groceries, and I would talk to 15 people by the time I got there.”

For a young woman who describes herself as “somewhat shy,” that ongoing, intense level of exchange was sometimes overwhelming. But she pushed through the discomfort, because that’s precisely what drew her to that area of the world.

McNamara was one of two young Fulbright scholars who recently returned to Dickinson to describe what they learned and experienced and offer guidance to students interested in following a similar path.

McNamara became interested in diplomacy and American-Islamic-world relations during the summer after her freshman year, while interning at the U.S. Department of State Foreign Service Institute’s Sub-Saharan Africa office. During her junior year abroad, she immersed herself in one facet of Islamic culture by studying in Morocco, and when it came time to apply for a Fulbright, she decided to explore Indonesia, home to one of the largest Muslim populations in the world.

“When you study abroad, you have institutional support, and you have a host family. You don't really have that in the Fulbright program,” she said, explaining that the 40 Fulbright scholars studying in Indonesia that year were scattered across the country’s 17,000 islands, and that to reach the closest fellow Fulbrighter, she had to travel for four hours by car or boat. “They kind of just drop you in a community and say, ‘Go. Teach and learn.’ ”

That directive was more difficult than anyone had anticipated. As an ETA, McNamara was prepared to assist the school’s English-language teacher—explaining idioms, preparing special lectures about American culture and history. But she soon learned that there was often no teacher on site to assist.

“Students would tell me that their teacher had not shown up once the entire semester, but they really wanted to learn English,” she recalled. “How do you say no to that?”

Adding to the challenge, while McNamara was fluent in Arabic and French, she did not speak Indonesian, so she had to learn the language quickly while also learning how to teach a class by herself. “Luckily, the more languages you learn, the easier it becomes—you kind of develop a blueprint,” she said.

She grew to love her job, and led each class primarily in Indonesian, often supplementing the language curriculum with special lessons about American culture and history. McNamara also joined a volunteer group of English-language educators who traveled to area schools, and spent time at an orphanage for children who had been victims of child trafficking—a  cause she has championed since volunteering as a summer intern for Free the Slaves.

Asked to reflect on the most meaningful aspects of her Fulbright year, McNamara said that it was the rare opportunities for frequent, meaningful cultural dialog with students, coworkers, neighbors and strangers alike.

“My students would ask me if all Americans looked like me. And people would come up to me on the street and ask,’Where are you from? What are you doing here?’ and we’d get in conversation,"  she recalled. Often, tougher questions followed: "Why does America support Israel and not Palestine?" "Why is America at war?" "Why do Americans in movies disrespect their parents and families?" And, conversation by conversation, she helped talk it through.

"As a Fulbrighter, you're a cultural ambassador, a semi-official representative of the U.S. government, and I took that role very seriously," she said. "I’m probably the only American that they have ever seen or will see, so to them, I was America. I wanted to be able to have as many difficult conversations as I could.”

Today, McNamara works for an international company that provides access to medical services to those traveling abroad—a job she lined up, with help from the Career Center, while still in Indonesia. Because she speaks French, Arabic and Indonesian, studied in Morocco and worked in Indonesia, she works with medical providers and travelers in southeast Asia, Africa and the Middle East.

“I love my job,” she said. “I get to live in the middle of Philadelphia and engage internationally and speak a gazillion languages every day.”