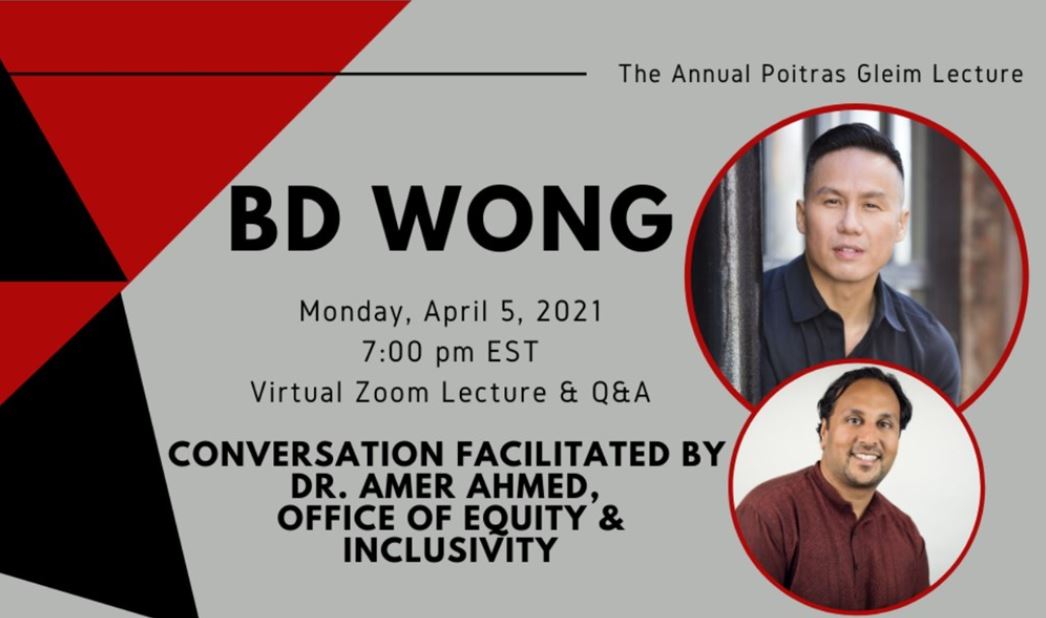 This year's Annual Poitras Gleim speaker is BD Wong. The lecture will take place virtually on Monday, April 5, at 7 p.m. EDT via Zoom and will be followed by a Q&A.

Award-winning actor BD Wong is one of America's most versatile performers. He has been on screens big and small for the last 20 years, appearing in such hits as Bird Box, Law & Order: SVU, American Horror Story, Gotham, Jurassic Park, and Jurassic World. His Broadway debut in M. Butterfly earned him a Tony Award, Outer Critic's Circle Award, Theatre World Award, Clarence Derwent Award and Drama Desk Award—making him the only actor to ever win all five major New York theater awards for a single role. Wong has also received an Emmy nomination for his role as Whiterose and Minister Zhang in USA Network's Mr. Robot. Most recently, he received praise for his role as the father in Comedy Central's Awkwafina Is Nora From Queens.

The annual Poitras-Gleim Lecture provides a forum to explore and promote cross-disciplinary thought and communication. Speakers are asked to discuss areas outside their known area of expertise. For the purposes of this event, the discussion with Wong will focus racism/racial self-image, multiple identities, fatherhood, male mentorship and LGBTQ+ identity. The moderator for the lecture will be Amer Ahmed, interim Chief Diversity Officer and Executive Director of Equity and Inclusivity at Dickinson.

"I feel the most important aspect is to try to get at the spirit of the lecture’s prompt, as written by the Poitras-Gleim family. This is not always an easy task—to find someone who is known for one thing but can speak fully about something outside of their area of expertise. I believe the timing of our selection of BD Wong couldn’t be more relevant. In the last year, attacks against Asian Americans have significantly increased. I look forward to the Dickinson community hearing from Mr. Wong about his thoughts around navigating identity and his own lived experience," says Erica Lawrence, Associate Dean of Student Life at Dickinson.

Kay Gleim Poitras ’53 and Edward Poitras endowed the annual lecture “to challenge the imagination of Dickinson students and faculty in discovering interesting individuals who cross traditional professional and disciplinary boundaries.” The lectureship brings a speaker of national or international renown to Dickinson each year to address a topic outside of their known area of expertise. Click here to find more information about the event.