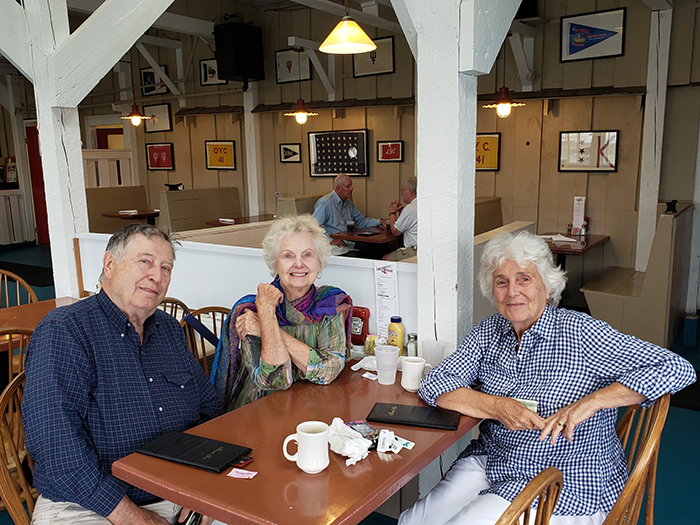 There was a time when Bill Keen ’57, P’89, wasn’t so sure he wanted to go to college, in part because of the cost. With a little help, he not only graduated from college—he kept on going, eventually becoming a professor. Now he gives back to Dickinson to ensure that current students in need of a helping hand also get a chance to discover and pursue bright futures that may otherwise be just out of reach.

Keen was born in Harrisburg, Pennsylvania, spent his early years in nearby Wiconisco, and moved back to the state capital, a relative metropolis, at age 5. An athletic kid who also loved to read, he attended public schools, joined the Boy Scouts, devoured comic books and learned to box. In high school, he ran track and enjoyed camping out, playing football free-for-all and, in edgier moments, sipping a little beer in Harrisburg’s Reservoir Park.

Keen’s dad worked long hours just to feed his family and was sometimes out of work during the Great Depression. So when family discussions in the kitchen began to focus on college, the high-schooler was concerned about the cost and eager to get a job that paid more than his paper route. He also was sick of going to class.

One evening, Keen’s dad drove him to Dickinson for a self-guided tour. Downtown Carlisle’s delights—two movie theatres! A custard stand! The Hamilton!—began to change the high-schooler’s thinking. And, as Keen’s father pointed to storied buildings on campus and relayed snippets of college history he’d carefully studied in advance, the young Keen was sold.

“I didn’t spend many full days with my father,” Keen recalls. “The evening in Dickinson, I now believe, was the moment when I started to appreciate the remarkable man he was.”

The family could scrimp to pay for part of the tuition, but not all. Keen’s Aunt Marion, a schoolteacher and Dickinson grad from the class of '21, made up the difference, and the once reluctant scholar was on his way.

The schoolwork was tough, especially during his first year, and ROTC kept him busy. But Keen took part in men’s glee club, Beta Theta Pi and the fraternity’s football team and, later, Follies theatre productions. To earn pocket money, he sold sandwiches through a shoestring operation run by fellow Betas (when one married, Keen took the reins and became known across campus as the “Beta Sandwich Man”).

Soon after earning an English degree from Dickinson, Keen accepted a teaching assistantship at Lehigh University. There, he earned an M.A. (1960) and Ph.D. (1967) and met his future wife, Sally (they married in 1961 and raised three daughters: Suzanne, Rebecca and Rachel, now Rachel Hutchisson ’89). After a brief stint at Oswego State, Keen accepted a position at Washington & Jefferson (W&J) College in 1966, where he remained until his retirement in 2000.

Over the years, Keen served on local boards, published articles in professional journals on Yeats, Chaucer and a number of modern short story writers and wrote volumes of poetry. Most recently, he published several poems each in Pidgeon Creek and Spitball, as well as an article on Yeats. And after years of delivering humorous autobiographical lectures for W&J’s Fortnightly Club, he penned two memoirs, Fibber McGee’s Closet and Other Lies Toward a Life (Lulu) and Eden Across the Street and Other Formative Places (Palmetto).

In Eden, published last winter, Keen describes the important places of his youth—including Harrisburg’s Reservoir Park and Dickinson’s campus—and the people, like his Aunt Marion, who helped shape him.

He established the Marion Clay Keen Annual Scholarship in her honor to help make a Dickinson education achievable to current students, just as his Aunt Marion had done for him.

“She had no children of her own, so she helped to send [me and my two siblings] to school. Now, I’d like to do the same,” he says. “It's a good idea to make higher education a reality for all the children within the reach of our voices and our humanity.”