Tweeting up at Ground Zero 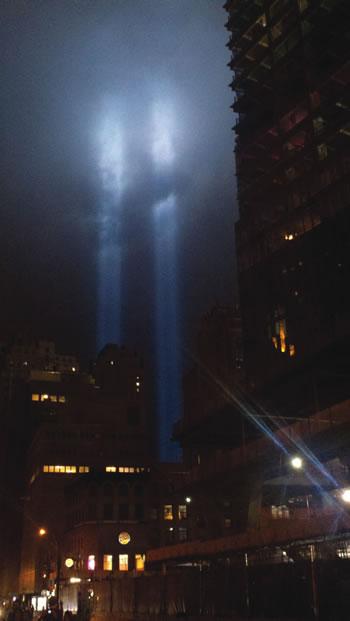 This photo of search lights illuminating the sky over lower Manhattan on the 10th anniversary of the 9/11 terrorist attacks was taken with Andrew Conte’s Droid smartphone. The lights pay tribute to the World Trade Center buildings that collapsed that day.

The assignment seemed simple enough: Travel to one of my favorite places—just in case.

As an investigative reporter for the Pittsburgh Tribune-Review, I cover stories such as the birth of casino gambling in Pennsylvania and patients receiving liver transplants when they’re not sick enough to need them. My wife, Tania Miller Conte ’93, and I live with our children, Noah, 12, and Claudia, 9, in Mt. Lebanon, just outside the city.

If everything went according to plan, I would have an expense-account weekend in New York City on the 10th anniversary of the 9/11 attacks. I chose not to dwell on the possibility that the narrative could veer in some unexpected way, the real reason my editors were sending me.

Instead, I focused on a new style of reporting: I would take a laptop, but I hoped to do most of the work—taking photos, filing short paragraphs and posting to social media—via my Droid smartphone. When I started at The Dickinsonian as a first-year student in 1989, the staff had just begun laying out the paper on computers. Now I carry a gadget in my pocket that allows me to send news right to the Internet, yet I still complain that it feels too big.

Before leaving Pittsburgh Friday morning, I filed a tweet about a group of local firefighters next to me in the airport security line. They had been at Ground Zero immediately after the terrorist attacks destroyed the World Trade Center towers, but they had not been back in 10 years. After the tweet, I posted to Facebook and filed a story on my laptop. The Trib had a story online before I boarded the plane.

In New York, I sent messages and photos whenever I saw something interesting. Early Saturday, I sent photos of a memorial service and of police at Battery Park with the sun rising on the Statue of Liberty. With each one, I sent a detailed caption. An editor in Pitts-burgh turned my tweets into a story for the Web.

It turned out my laptop would not have worked for street reporting. I had taken a computer from the office pool but ended up with the wrong power adapter. The setback became a blessing when I headed to the memorial service Sunday. I was glad not to have the extra weight when I had to walk blocks out of my way to reach the media registration area, and while other reporters turned their computer bags over to the Secret Service for inspection, I just emptied my pockets.

When police and firefighters practiced unfolding an American flag before the ceremony, I posted a photo to the Web. I sent short stories about victims’ relatives I met in the crowd and tweeted when President Obama appeared. As James Taylor sang on the stage, I uploaded a photo to Facebook. A moment later, a former colleague from Florida wrote back about watching the ceremony on television. I could not compete with televised images, but I could provide a perspective that took in more than the cameras’ lenses.

By midmorning, my postings turned into a discussion. Instead of sending a one-way stream of information, I started fielding questions and watching as people in my network who do not know each other in person started communicating. My experiment was working.

Amid this silent cacophony of digital postings, I received a personal message: “How long will you be in New York?” The query came from Todd Wachtelhausen ’93, my Dickinson roommate. Just as working at The Dickinsonian had been a transformative experience for me, Todd’s junior year abroad in Málaga, Spain, had been his catalyst. After school, he combined passions for language and sports into a job as a producer for ESPN International. Todd was in Queens to cover the U.S. Open tennis championship that day.

I have a vivid memory of walking with Todd and other friends from our dorm, Quad 6, to the Holland Union Building for dinner and talking about our dream careers. Two decades later, we were fulfilling those early promises.

Todd and I decided to meet for dinner. After filing a final draft of my story on the laptop in my hotel room, I watched the tennis match from a bar across the street, rooting for a quick ending.

Todd arrived in Tribeca around 9 p.m. I saw him across the street, and we hugged in the middle of Broadway. We had not seen each other for too long, and dinner conversation turned on our families, friends we had seen and old stories from Carlisle.

Close to midnight, we walked about a mile to Ground Zero to see the tribute lights shining near where the towers had stood, and we wandered around a memorial where firefighters from across North America gathered to swap stories. I posted a few photos to the Web.

Here we were—two friends coincidentally in the same city, living out the lives we first envisioned at Dickinson—and we might have missed each other, without technology.

Andrew Conte ’93 is an investigative reporter for the Pittsburgh Tribune-Review and is the author of Breakaway: The Inside Story of the Pittsburgh Penguins’ Rebirth.