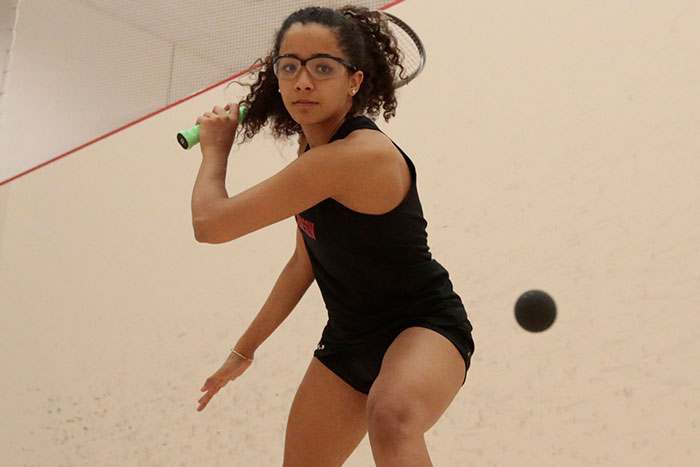 Alanis Perez ’19 picked up squash in fourth grade through an after-school program called Squash Haven. "It was the first year Squash Haven was starting in New Haven when I joined," she says. "We went on a field trip, and they told us about this new program and we should come and try out. I went and tried out and got into the program and started playing every other day at Yale University."

"As I got older, I realized that I’m playing with the top players in the country," Perez says. "It’s one of the best programs in the nation, and I’m training with one of the best coaches that there is in the sport. I realized as I got older how lucky I am and that I needed to take advantage of every opportunity I had."

As she played in high school, one thing became clear: She wanted to play at the collegiate level. She decided Dickinson was the top landing spot for her to continue her career because it was a brand-new program in the squash world then.

The Red Devils play as a varsity program in the Collegiate Squash Association, and opponents can range from the United States Naval Academy to George Washington University to Tufts University.

"It was pretty cool to be at Dickinson ... competing against some of the top schools in the country,” she says. "There was a lot of pride in being one of the top-20 programs and seeing that we had the ability to keep climbing higher and higher."

When she reflects on her time at Dickinson, Perez remembers the pride she had in representing something greater than herself.

"Squash is a very individual sport," she says, "but every time I stepped on the court, I wasn't just playing for myself. I was playing for my teammates and playing to represent Dickinson."

The women's squash team showed steady improvement and development during her time at Dickinson, improving its national ranking each season. Finishing 26th in 2016, Dickinson advanced to the final of the Epps Cup at the College Squash Association Team Championships. They elevated to the Walker Cup Division, ranked 23rd at the end of the 2017 season and made another strong run to the final of the Walker Cup in 2018 to rise to No. 18 in the CSA standings. They returned to the Walker Cup again in 2019, advancing to the semifinals. In addition, the Red Devils were honored by the CSA as the most improved program in the country in 2018.

Squash also served as a great teacher to Perez, imparting lessons that extend beyond the court.

"It taught me to respect people," says the former biology major and current research specialist at UPenn Medical Scribe at St. Christopher’s Children’s Hospital. “It made me realize and learn that people walk different paths in their lives and experience different things. Now working with people who are so different helps me keep an open mind, and it is important to honor and recognize that. There is a lot of diversity in the world, and squash helped teach me that."