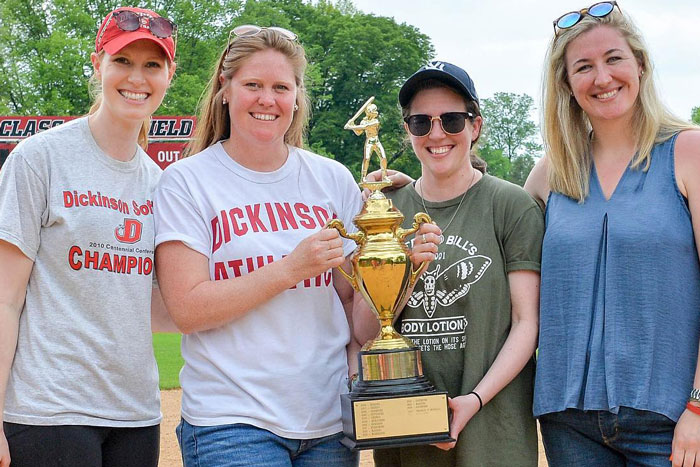 From left: Allison Jordan '11, Melissa Osborn '13, Mary Kate Flannery '10 and Liz Barry '11, at the 2019 Centennial Conference Championship. They were all part of the previous softball championship team, in 2010.

Liz Barry ’11 was part of a four-year run for Red Devils softball that saw the program hoist its first ever conference championship during her junior year and host as well as play in the conference tournament her senior season. She grew up outside of Boston in a big baseball family and began playing softball at around four or five years old. She would go on to be a three-sport athlete in high school, excelling in field hockey, basketball and softball.

When the time came, Barry applied to one college, Dickinson, knowing from the start it was where she wanted to spend her collegiate career. Once at Dickinson, Barry felt an immediate connection with Head Coach Matt Richwine.

"He was very calm in his coaching style," Barry says. "That was not the case with other coaches I had been with or other coaches elsewhere, and I trusted how he was going to coach and run the team." She could also see the upward trajectory that the program was on. After playoff appearances the last few years prior to her arrival, she knew it was a program that she could help continue the momentum and reach new heights.

On the field, the team did just that during her four-year run, making the playoffs three times, including two consecutive trips to the Centennial Conference Championship.

"Funny enough during the 2010 season we were not having a good year," Barry says. "We just couldn't get it together. One day the defense would be great but the offense wouldn't be, or vice versa. We scrapped our way into the playoffs that year." The Red Devils would claim the first title in program history that season.

Off the field, Barry majored in philosophy, which she found beneficial to her development and preparation for law school. Now serving as the assistant district attorney in New York County's district attorney's office, Barry pulls on the lessons learned at Dickinson, not just in the classroom but also on the softball diamond.

"So much of being an athlete my entire life and playing on teams has impacted how I am as a lawyer and handle what I do on a day-to-day basis," Barry says. "I’m a trial attorney, and … I didn't realize it was going to be so teamwork oriented until I got there."

Barry was part of one of the most dominant pitching staffs in program and Centennial Conference history. She was a two-time All-Conference selection and a member of the Conference Academic Honor Roll. She was voted a team captain as a senior and was named the team's Most Valuable Player in 2009.

Barry tossed a perfect game in 2009 and threw two no-hitters, ranking in the school's top 10 in numerous categories, including complete games, wins, earned run average, shutouts and strikeouts. She helped lead the Red Devils to an NCAA tournament appearance in 2010 after they won the first conference title in program's history. They also advanced to the conference championship game in 2008 and 2011 and captured the regular season title in 2011.