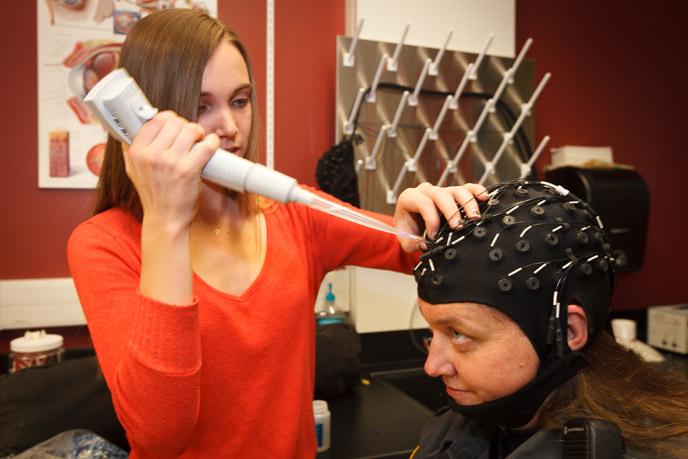 Sara Patterson '14 injects a solution—“fancy salt water, a lot of water, and two drops of baby shampoo”—into sponge-filled nodes that allow brain signals to be transmitted and recorded. Photo by Tony Moore.

Studying the effects of danger on human perception

You're a city cop. It's dark, and something is moving in the wind. It flutters back and forth, and a shadow is cast across your eyes. A suspect has a gun to your partner's head at the back end of an alley. A gunshot barks. Your partner slumps to the ground. Someone runs past you, out of the mouth of the alley and into the night.

This happened. Yet it didn't, as Assistant Professor of Psychology Jon Page explains.

"The cop managed to run the guy down and then called for backup," Page says, citing an actual incident he uncovered in his research. "He said, 'You have to help my partner! He just killed my partner!' And then his partner came walking up and hadn't been shot at all. He's been having a hard time with this, because he saw it happen. So … how can that happen?"

Situations and questions such as these lie at the heart of Page's recent research project, Developing a New Model of Human Perception and Action Under Danger or Threat, and with it he hopes to explore psychology from a new angle.

"Under pressure and stress, our perceptual system works differently," Page says. "But to what extent?" To find out, Page examined existing models of perception and action. What he discovered was that most published studies were based on how we react to normal situations. So he developed a model that would test stress-reaction situations, and it began with the brain itself.

"When we see things, 90 percent of the information goes to the visual cortex and 10 percent splits off to the amygdala, which helps process things like threats," he says. The split, he explains, results in 10 percent of your brain saying, "Snake!" and 90 percent then saying, "No! Garden hose," when you see a snakelike object lying in the grass, for instance.

"It's a survival thing," Page says. "It's not that accurate, but it serves as an effective warning shot." And it's a lot better than grabbing a rattlesnake to water your lawn.

Misperceptions happen regularly—e.g., we think we see a friend driving by but realize it's just another person in a similar car. But when it happens to police officers, it can lead to a situation like that in New York City in 1999, when Amadou Diallo was shot by four police officers who erroneously perceived the wallet in his hand to be a weapon. Police call these events mistake-of-fact shootings, and Page's research digs into the causes behind them.

"First, context is key," he explains. "A cop would never think someone pulling out a wallet in a restaurant was pulling out a gun." But in the right context—in a darkened alley with your heart pounding from pursuit—the tone is set for perceptual error.

"What can happen is that your worst fears—'He's going to shoot my partner'—get turned into an internal representation—'He just shot my partner,' " says Page.  "So now I'm testing that, to see how it works."

"I was really interested in cognitive neuroscience, and Professor Page was looking for people to get involved for the full four years," Patterson says, noting that the length of the project alone is a rarity in undergraduate education. "We have a lot of independence, and Professor Page trusts us and lets us run the experiments on our own."

In one prong of the experiments, the research team showed participants visual patterns that are unique to the lab—something people don't see in nature—and had the subjects imagine those same patterns from memory. The EEG (electroencephalograph), which measures brain activity, indicated that the visual system behaves functionally in the same way, whether the subject sees the patterns or imagines them.

"So then we took the imagination angle a little further and said, 'What if I just describe the pattern, and the subject has never seen it before?' " Page says. "It turns out your brain still behaves the same way. So when you see, remember or imagine something, your visual system is being used, which in the end allows for the possibility of what you fear actually affecting what you see."

And if the imagination signal is "heavier" than the visual signal, perception might be skewed toward seeing a wallet as a handgun or seeing your partner get shot when he wasn't, as the "lighter" signal—what you are actually seeing—waits to be processed.

The decision that wasn't

Page hopes that this conclusion leads to changes in how the criminal-justice system looks at mistake-of-fact shootings.

"They come at it from a decision-making standpoint instead of a neurological one," he explains. "But decision making is a very high-level cognitive process, so in times of danger and threat there are a lot of other cognitive processes needed to build up to making a decision." But under stress, he continues, cognitive processes are hampered, "so if these properties are impaired, why would you still be able to make decisions?" Page asks.

"With decision making, they're talking about somebody making a choice to do something wrong. 'I made a choice to shoot that guy,' " he says. "That shouldn't be the first place you go, because I would argue that he's not even making a choice."

Page's research also has moved overseas, where he did ride-alongs with London Metropolitan Police cadets and veterans, studying their reactions to certain driving events in the hope of advancing further aspects of police psychology and training. It could be a long road to the end of the study, but Page's new model—and the subsequent departure from the current way of looking at the issues—is a big first step.

"In studies of stress-action, there aren't models that take into account if someone has a gun to my head or has shot a bullet at me," Page says. "So the model is important, because a model says, 'This is how the system normally works,' and then you start from there."

In the photos and videos below, Page and Patterson—along with Michael Guido, lieutenant of operations for Dickinson's Department of Public Safety (DPS), and Marcy Wolf, a patrol officer with DPS—go through the pilot phase of what Page will bring to the table in the next phase of his research: studying police officers under threat.