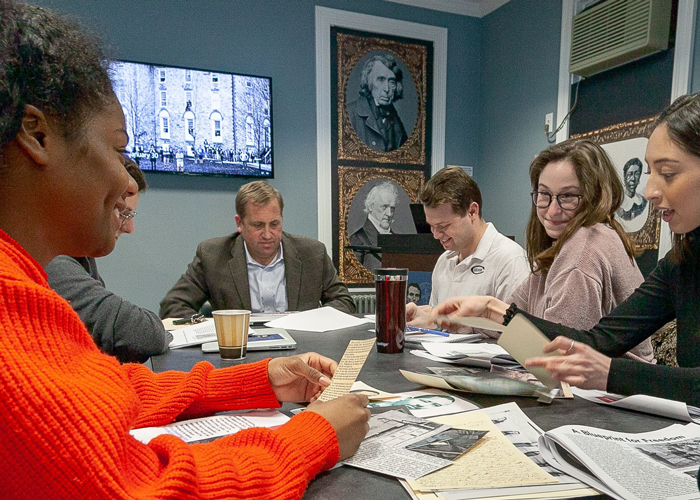 Dickinson College has received a three-year, $300,000 Knowledge for Freedom grant from the Teagle Foundation to conduct a residential summer program for high school students from underrepresented populations to learn about the historical struggle for freedom in the United States. Dickinson’s program will be based on its successful House Divided Project, which examines the Civil War and Reconstruction, and will be offered to a total of 72 low-income high school students in the central Pennsylvania region over the next three summers.

The Teagle Foundation’s Knowledge for Freedom initiative supports programs that invite underserved high school students to college to study humanity’s deepest questions about leading lives of purpose and civic responsibility. The House Divided Project exists to help K-12 classrooms learn more about the American Civil War and the destruction of slavery, with special attention paid to efforts to end slavery, known as abolition.

“We have developed a series of curricular innovations on the study of slavery that seem almost ready-made for serving the goals of the Knowledge for Freedom program,” said House Divided Project Director and Pohanka Chair in American Civil War History Matthew Pinsker. “Few subjects can better illuminate the ongoing debates about freedom, democracy, and self-government than a complex understanding of global abolitionism in all its competing strategies and achievements, and also, unfortunately, in the elements of its still-unfinished work.”

Dickinson’s three-week residential program will build on the resources of the project, the college and the historically significant surrounding area. “There was a centuries-long movement to overthrow the intellectual and political tyranny of slavery—a debate that played out not only in street protests and electoral politics—but also in art and literature and in various cultural ways that are still evolving,” said Pinsker. “We plan to use these powerful stories as our gateway into the Knowledge for Freedom program.”

Dickinson is among 11 colleges and universities currently running programs with the Knowledge for Freedom paradigm. They are Columbia University, Yale University, New York University, Boston University, Newberry College, University of Rochester, Ursinus College, Washington University in St. Louis, Villanova University and Miami University of Ohio. Early data from the first program at Columbia suggest that Knowledge for Freedom can have a profound impact on students’ academic and civic success after high school. Nearly every one of the 300 graduates of Columbia’s Freedom & Citizenship program has enrolled in college within six months of finishing high school, though they attended public schools where fewer than 60 percent of graduates advance to college.

"Our goal with this program is to help prepare area high school students for success at college and to embrace their responsibilities as citizens," said Pinsker. "We believe that by experiencing the intrinsic value which comes from deep study of important issues, like freedom and democracy, our program participants will become better students and more effective community leaders."

Details of the program, including dates and application information, are now available on the House Divided website.