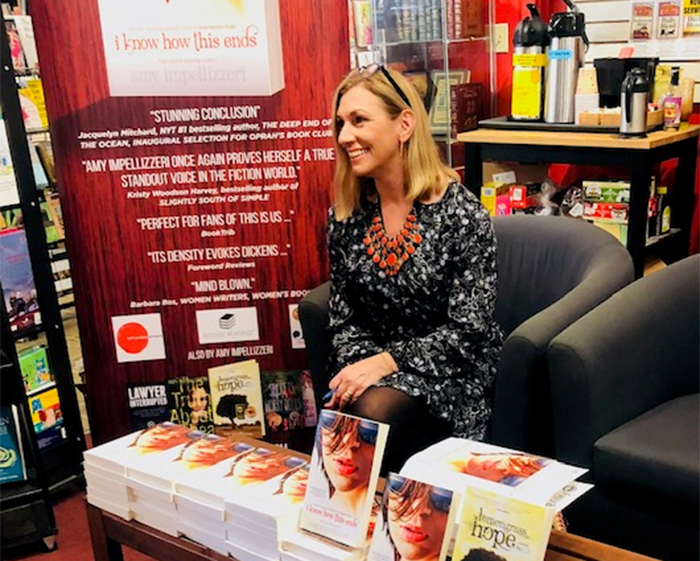 Novelist Amy Shelley Impellizzeri '92 at a book signing for her most recent work, "I Know How This Ends."

What happens when your hard-fought dream comes true—and you realize it’s no longer right for you? For Amy Shelley Impellizzeri ’92, that moment of reckoning was a difficult first step toward an uncertain future and, ultimately, a more satisfying career.

Impellizzeri knew she wanted to be a lawyer since high school, and she chose her Dickinson extracurriculars (mock trial) and majors (English, philosophy) with eyes on that prize. She also loved writing, a critical lawyerly skill, but wasn’t sure of her creative-writing abilities. Leaving nothing to chance, she took a creative writing class as a pass/fail (only to later discover that she would’ve earned an A).

Three years after graduation, Impellizzeri had a J.D. from George Washington University in hand. And by age 31, she was on the partner track at a major New York City firm with plans to start a family and a home in the seaside Queens suburb of Belle Harbor, New York.

Just two months had passed since the attacks of 9/11, and Impellizzeri awoke that morning to the sound of an aircraft flying overhead. That wasn’t unusual—she lived less than 15 miles from the John F. Kennedy Airport. But this plane, she knew, was flying too low. Hurrying to her bedroom window, Impellizzeri saw American Airlines Flight 587 crash right across the street.

It was the second-deadliest crash in American aviation history, and five of her neighbors perished, along with all 260 people onboard the flight.

Impellizzeri’s home was the only undamaged corner house at the crash-site intersection, and it served as a makeshift command center for first responders that day. The next day, she cleaned up the mess and replaced broken doors and hinges.

"In truth, I had no words and no voice to deal with the survivor’s guilt or the horror or the grief I was experiencing at the time. Instead of reflecting, I dove headfirst into work and soon after, motherhood," Impellizzeri remembers. "In 2009, nearly 8 years after the plane crash, I realized the exhaustion I was feeling over my life and work really needed to be addressed."

Writing had always helped Impellizzeri process her experiences. As she worked through the recent events on the page, she rediscovered her love of the craft. Impellizzeri took a sabbatical year—time to volunteer, do pro bono work and figure out next steps. By year's end, she still wasn't sure what her next chapter would look like, but she knew she needed a change.

During the next few years, Impellizzeri wrote on the side. She planned. She built up her savings. She wrote some more. And after she'd completed a manuscript and secured her first book contract, she was ready to take the leap to writing full time.

"Having come from a path where everything is linear—take the LSATs, go to law school, clerk, get a law firm gig—it was completely overwhelming to enter a field where no one’s path is exactly the same and everyone is struggling to articulate how exactly they did what they did to get here," says Impellizzeri, who's grateful for a close community of writers who offered support, camaraderie and critiques.

Her latest novel, I Know How This Ends, spins a tale of a reporter who is inspired, while telling others' stories, to reexamine her own life choices. It's a familiar theme, one that's central to the writing life. And ultimately, that introspection has led Impellizzeri to appreciate the ways that her prior life helped prepare her for her second act.

"I always tell people who are unhappy in their current professional paths to explore what it is you would do for free, if you could, and then find a way to do that thing not for free. Writing was that thing for me," she says. "I’m careful to appreciate the successes and struggles and, frankly, the journey itself."