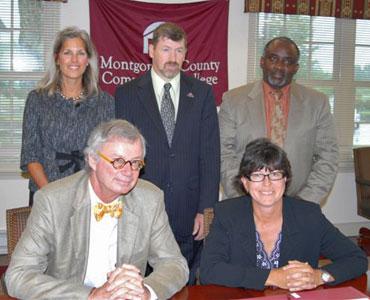 The most recent partnership was commemorated Thursday with a signing ceremony at Montgomery County Community College's main campus in Blue Bell, Pa. President William Durden and Stephanie Balmer, vice president of enrollment & communications and dean of admissions, represented Dickinson at the event.

Dickinson's goal is to expand the partnerships to up to 15 community colleges; half in the Mid-Atlantic states and half in other areas of the country where the college recruits first-year students.

A defining aspect of The Community College Partnership Program is its active, coordinated and structured approach—a strategy that goes well beyond the typical articulation agreements between most community and four-year colleges. Students interested in the program are identified in their first-year and Dickinson staff, working with community college advisors and counselors, will ensure the selected students receive the support, coaching and course work needed to transfer and be successful at Dickinson. Potential matriculates must earn a cumulative grade point average of at least 3.25 and graduate with a transferable associate’s degree to enable students to matriculate with junior status and complete a bachelor’s of arts or sciences degree at Dickinson in two years.

In these challenging economic times, the partnership offers students a new approach to financing and completing their college education. The program introduces a new “tuition model” for higher education at a time when students and their families are particularly nervous about their ability to meet the cost of a college education—particularly at private, liberal-arts colleges. Financial incentives from Dickinson, in the form of a community college scholarship up to $15,000, plus other grants and financial aid to meet fully their demonstrated need so that tuition is neither an obstacle nor a deterrent.

“Dickinson and other private Northeast liberal-arts colleges must look beyond high schools as the traditional source of new students," Durden said. "There is available to all of us a source of students that has not been fully utilized, a place where students from all income and academic preparedness levels are educated. This partner is ready to collaborate with institutions, such as Dickinson, to help its students succeed. It is the American community college, right in our backyard."

The Community College Partnership Program will launch with four or five students from each of the four pilot community college partners. The students will enter Dickinson as a group, a strategy that is similar to other cohort groups on campus. The idea is that students adjust and perform better when they have a built-in support system and all the members are going through a similar experience. While some transfers will take place this year, a distinctive feature of this program is the close working relationship of both institutions with select students and the full benefit of this approach will not be realized fully until 2010.

The expectation is that following the pilot program, the number of community college partners would expand to 10 or 15 and the number of transferring students would climb to 50 or 60.

As community colleges have developed selective honors programs, more students who would have previously begun at a four-year college are instead beginning their higher education at a community college. In the U.S., demographic changes forecast that over the next ten years community colleges will need to educate an increasing number of lower income, first generation and minority students. Those same demographic shifts will affect private four-year colleges, as these students are less likely to enroll at these institutions as first-year students.