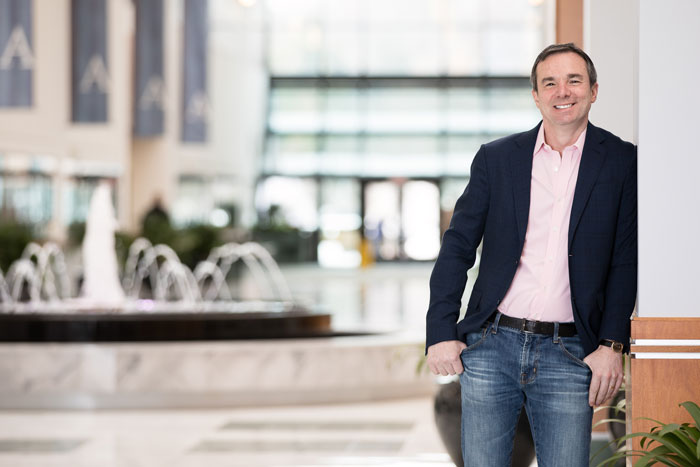 It’s not a direct path from computer science major to CEO of a tech company. But for Mike Capone ’88, the mix of hard tech and liberal arts he was immersed in at Dickinson made that path more direct than you might think. And he recently met with majors on a virtual Math & CS Chat to tell them about his career trajectory.

“One of the things I'll come back to is you’re incredibly lucky if you're in a math or computer science discipline inside of a liberal-arts college,” says Capone, the CEO of Qlik, a company that provides data analytics and data integration to more than 50,000 businesses around the world. “So the best thing I can say about Dickinson is it educated me really, really well.”

Capone started his career with ADP, where he worked his way up through positions such as general manager of ADP’s global outsourcing business and corporate vice president of product development & CIO. The latter role included responsibility for all of the technology operations for the company, which wrangles trillions of payroll dollars across 600,000 companies and 40 million of their employees worldwide.

After 27 years with ADP, Capone was ready for a move up the corporate ladder. And when an opportunity with Medidata came along, he jumped on it and joined the life sciences company as its COO. After helping the company grow from $270 million in revenue to $550 million in three years, a new company came knocking—Qlik—and Capone has been there ever since as CEO. And he says Qlik has something, maybe unexpected, in common with Dickinson: Sustainability and working toward the common good are at the heart of its mission.

“We’re working on huge global initiatives, the biggest one being climate change,” he says, noting that Qlik is teaming up with the United Nations on the issue and is broadly socially responsible. While working hard to reduce its carbon footprint, Qlik is also involved in about 20 different COVID-19 initiatives, working with drug companies and several state and county governments on vaccine distribution and disease models—all for free.

“And you know what? My employees love it,” says Capone, who also notes that Qlik allows employees to take unlimited days off to do charitable work. “They go home from work every day knowing that we're changing the world, and I feel great coming to work every day.”

As for students looking to follow in his footsteps, Capone has some parting advice.

“When you're in an interview, when you think about the skills and qualities you have, I always tell people, make sure you emphasize continuous learning and your ability to adapt and learn—what the liberal-arts education is about,” he says. “Because your education taught you [ways] of opening your mind to new ways of doing things. Never forget what Dickinson brought you.”