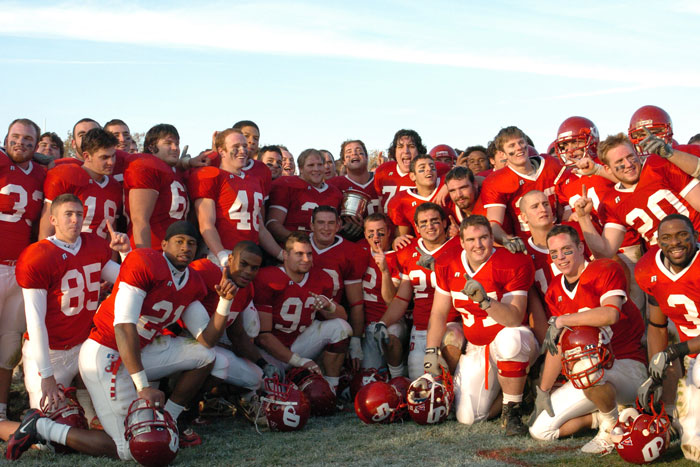 Will Scott '08 (No. 21, bottom left) with his Red Devil teammates after winning the Little Brown Bucket trophy against the Gettysburg Bullets.

Will Scott '08 truly embraced the college experience at Dickinson, from playing multiple varsity sports to being the founding member of a fraternity. He grew up in Prince George's County and attended Mercersburg Academy, just down the road from where he would eventually spend his collegiate years.

"At Mercersburg I played football, ran track, played a little baseball and a little bit of this and little bit of that," Scott says. "[Head Football] Coach Q [Joel Quattrone] came down for a recruiting visit, and I knew I was going to Dickinson after that meeting and visit." Another conversation with Quattrone on how a Dickinson education would fit Scott's long-term goals really sealed the deal. "It was the first time a coach had really come and talked to me about all the ways I was going to grow as a student," Scott says. "From the moment I walked onto campus and met the guys and got to experience that atmosphere, I knew I was home."

Scott took full advantage of the Dickinson experience, getting involved across the campus in a variety of aspects outside of just playing football. He ran track all four years, was a student senator, was a member of the Gray Hats and founded the fraternity Kappa Alpha Psi. "The coaches were really big on doing other things," Scotts says of coaches Darwin Breaux and Quattrone. "Coach gave us an opportunity to experience college, and that was one of the cool things. It wasn't just football. There was an opportunity to be a student, which is amazing because you don't get those years back."

Scott feels fortunate he was that Dickinson encourages people to get involved and leave their mark on the campus. He cites the fact that he could start a fraternity as the perfect example of why he believes Dickinson helps cultivate young men and women in their development over four years.

On the field, Scott helped the Red Devils achieve success, as the team claimed the 2004 and 2006 Centennial Conference championship. But it isn't the wins and titles that Scott remembers the most; it's the lessons instilled in him by Coach Breaux and the staff. "It was [about] how important the game is but in the bigger picture," Scott says. "It's how the sport is meant to help you with challenges and understanding the bigger picture of life."

Off the field, Scott, who started his career as a law & policy major, found an interest in finance after gaining internships on Wall Street through Dickinson connections. Upon graduation he would begin his career on Wall Street through another Dickinson connection, which is why he feels it is important to give back today. "My career achievements came from networking with Dickinson alumni," he says. "The best achievements of my life have come through Dickinson. Turning points in my life came from Dickinson and people at Dickinson. For both my wife and I, any opportunity we have to help students out there, we want to do it."

Whether it was on the field, in the classroom or on the floor of Student Senate—and even now in his personal and professional life—Scott embraced and still embraces what it truly means to "Wear the Red" and why that didn't stop upon graduation. "For me, 'Wearing the Red' is similar to a Latin phrase that I really like: 'Esse Quam Videri' ('To be rather than to seem')," Scott says. "Wearing the Red talks about being, rather than seeming. The whole concept of doing good even when no one is watching you do good."

Scott capped an outstanding career in football with a great senior season, recording 69 tackles and three interceptions, including one he returned for 56 yards. He also scooped up a fumble and went 86 yards for a touchdown against Hobart. He recovered a fumble for 55 yards in the NCAA game at Wesley in 2006 after helping to lead the Red Devils to a second conference title during his time on the team. He finished with over 100 career tackles and five interceptions and covered over 100 yards on six kickoff returns in 2005. He joined the 4x400 relay to win a bronze medal at the 2008 Centennial Conference Outdoor Track & Field Championships and had four top-20 performances at conferences in the 200 and 400 meters. Indoors, he added a pair of fourth place showings in the 4x200 and 4x400 relays.