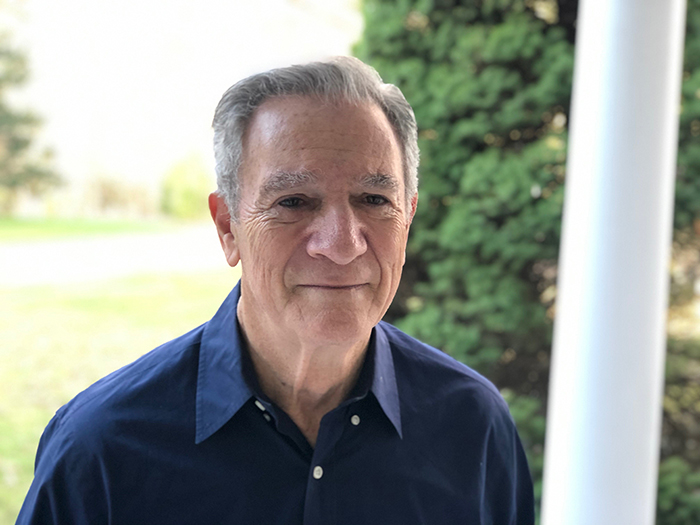 Lying in bed with a bad cold, just before graduation, young Eric Evans ’68 was at an inflection point. He’d excelled in class, developed deep friendships and sharpened leadership and organizational skills. But he wasn’t quite clear about what to do next.

“I was very aware that my parents had sent me to college, and I needed to do something with that opportunity,” he says. “The question was: What?”

Today, Evans looks back on a distinguished career in business, finance and corporate leadership. During a recent conversation with Dickinson, he discussed the keys to success in business and finance and his work with current Dickinson students, interested in similar career paths.

As an undergrad, Evans got involved on campus—most notably, as president of Interfraternity Council and member of Raven’s Claw and Skull & Key—and thoroughly enjoyed learning about a broad range of subjects.

“All of my classes—whether it was science or literature—taught me to think critically,” says Evans. “I learned how to think through a problem, whatever the problem was, and look at it from different points of view.”

The only problem was that back then, internships weren’t as common, and Dickinson’s Career Center wasn’t nearly as robust as it is today. For an English major with wide-ranging interests—and an idea that he’d one day like to work on Wall Street—career planning was a bit of a challenge.

A Philadelphia Inquirer want ad, placed by corporate-education company, provided Evans with an excellent starting point. The company was searching for a “well-spoken, well-dressed, well-groomed recent grad” willing to travel and move to NYC. For the college senior, excited by the prospect of travel and an office building on Park Avenue, it was a great fit.

For roughly two years, Evans traveled to a new city every week to set up seminars, introduce expert speakers and sit in on a crash course in finance, marketing and other business matters. But when a recession hit, and the company went bankrupt, he was again in need of a job.

With abundant patience and persistence, and after weathering a few disappointments, Evans worked his way to being named senior vice president at a regional investment bank in Philly. From there, he traveled to Wall Street, where he was senior vice president of a merchant bank for more than a decade. Along the way, he also earned an MBA at Pepperdine University.

After a decade in investment banking, Evans pivoted to corporate leadership, serving as CEO of Communications Corporation of America, a telecom company he purchased and sold, and of RCA Business Telephone Systems. By the mid-1990s, he was ready to open a new chapter as entrepreneur.

As founding owner and senior managing director of the investment bank Evans Hagen & Company (EH&C), Evans has raised capital for early-stage companies in the U.S. and China.  As the firm’s senior expert witness, providing opinions for some of the largest legal firms in the nation, and helping them litigate complex business and finance issues, he’s advised legal teams representing Fortune 500 companies and the Department of Justice and the FCC, and he has testified as an expert witness more than 75 times.

In recent years, Evans also took on another leadership role, as chairman of the board of the software company Netshield. He additionally sits on the board of directors of more than a half-dozen companies.

Over the years, Evans has given back to his alma mater as a member of the Alumni Council, Mermaid Society, John Dickinson Society and board of advisors and as chairperson for annual giving for the class of ‘68. He’s also hosted Dickinson interns for some 20 years, and even hired a few.

“I’ve been very impressed with the students I’ve worked with—they’ve shown me they’re smart self-starters, and they can think on their feet,” he says. “If you’re an intern on Wall Street, you don’t get any time to meet directly with clients, and it can take years of moving up the ladder before you really get any responsibility. But these students are not simply bag-carriers for EH&C. Interns at EH&C receive on-the-job training in real-life financial situations.”

Aaryan Kaphley ’21, a quantitative economics major from Nepal, was one nine liberal-arts students who interned at EHC last summer, four of whom were international students. Kaphley helped develop a valuation for one of the firm’s early-stage clients, developed market share projections and carried out market research, working remotely because of the COVID-19 pandemic.

“I learned a lot about investment banking and finance. I also had the opportunity to work with a lot of talented people and make valuable connections.” says Kaphley. “Mr. Evans guided me through the course of the internship and gave me good advice for the future.”

So, what advice does Evans offer to fellow Dickinsonians? One key piece: Cultivate persistence and a lifelong openness to accept change.

A recent case in point: Pre-COVID-19, Evans stayed in touch with fellow Raven’s Claw members—his closest friends from Dickinson—through   quarterly visits and almost daily phone calls and emails.  Now, a weekly Zoom happy hour brings these septuagenarian friends together. The recent lockdown brought extra time at home with his three college-age children and his significant other. They recently enjoyed a restaurant dinner al fresco—something they likely wouldn’t have otherwise experienced.

While Evans stresses that these small benefits in no way outweigh the seriousness of the global health crisis, he’s equally mindful of recognizing the things he’s grateful for, and to remain on the lookout for emerging opportunities to grow, professionally and personally.

That advice is timeless, as well as timely, and it’s universal. And for Evans, it’s inextricable from the sort of intellectual curiosity that drew him to a certain liberal arts college, a half-century back.

“I was reading about a plague that wiped out half of the population in ancient Greece, and how the empire was falling apart, and some of the great philosophers said that these times of great hardship always present opportunities for change. I believe that wholeheartedly,” he says.