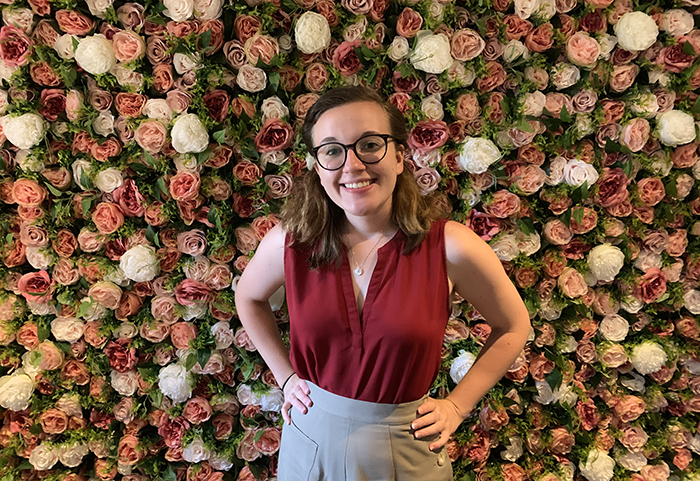 Julz Espensen '23 is a history major, World War II reenactor, vintage enthusiast and blogger who writes about her adventures in historical research and historical projects, including clothing restoration and cooking historical recipes. Below, she discusses what drew her to her major, her experiences making friends at college, the running family joke about her college tours and more.

Ever since I first stepped foot on campus, Dickinson felt like home. Carlisle isn’t too terribly far from Lancaster, so that was a big factor. I knew what I wanted my major to be, and absolutely fell in love with the programs. Even though I toured on a rainy fall day, campus was still breathtaking. Dickinson was the school that I constantly thought about and compared to other schools (to the point where my mom and I had a running joke: “Well, it’s not Dickinson …”). I ended up applying Early Decision and did not apply to any other school.

The friends I have made. I came to Dickinson knowing what my major would be, so I connected with two gals with similar interests through the class Facebook group and ended up being in a triple with them my first year. They are some of my closest friends. And through our Pre-Orientation programs, we ended up with a tight-knit friend group. We are all hoping to live in the Human Cultures House this spring.

I love how you can really tailor the history major to you. All the professors I have gotten to meet and work with are extremely helpful, supportive and knowledgeable. It is obvious that the professors value their students. I am very excited for the opportunity to be on the Majors Committee Board this year. While at times the major can be a lot of reading and writing, it makes you a better student overall because it makes you pace yourself and work on your writing skills.

It would probably be Global Masculinities. Professor Pomales was great at leading discussions, and I really enjoyed the selection of articles he chose for the class. It was also the class I ended up being the least stressed about when we made the transition from in-person to online due to the virus, and I really enjoyed still being able to talk with my classmates about the readings we had.

... either a teacher, writer or crime detective. A weird combination of things, but I had an affinity for the show Castle. I quickly realized I wouldn’t be able to stomach a career as a detective, nor would I become the next Stephen King.

Since I was 15, I have been into World War II living history (reenacting). I’ve made some of my best friends through the hobby, and have been able to do some absolutely incredible things (such as participate in the commemoration ceremony for the 75th anniversary of Pearl Harbor in Washington, D.C., when I was in high school).

In high school, I got to intern at my local historical society (LancasterHistory) in the archives. I had volunteered there since my freshman year of high school, giving tours and such, but wanted to gain more experience in other parts of the museum. It was there that I truly discovered my love for history and realized that I wanted to pursue a career in the museum field. I plan on interning at the Army Heritage Education Center in the spring if we are back on campus, which is something I am really looking forward to.

The most important thing I’ve learned, especially in the past months, has been to be flexible. There are many things that are simply out of my control, and it takes far too much energy out of me to be constantly worried about them. I try to focus on what I can control and try to do my best in classes given the situation.

I plan to take a gap year to work/intern/volunteer at various museums before going to grad school for museum studies and/or public history. I haven't decided whether I want to pursue a career in the education, curatorial or archival departments in a museum.