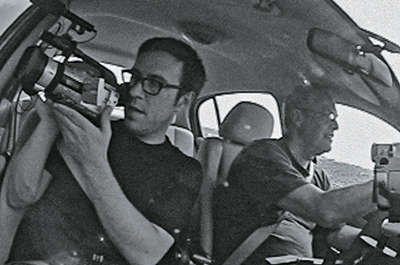 Art meets science in Tornado Alley, and the results are remarkable

Pummeled by hail, tossed about by unrelenting wind, a rent-a-car that is guaranteed not to emerge unscathed zooms along dirt roads going any direction but northeast. The impending tornado billows and whirls, and the wind whistles as loudly as the siren declaring danger.

The driver presses hard on the gas pedal, simultaneously snapping photos of the ominous sky ahead. The passenger dangles precariously into the back seat, peering through the viewfinder of a video camera, capturing every breath-stopping second of the force of nature they came here to find and are now attempting to evade.

All in the name of art.

Those artists are Ward Davenny, professor of art, and Todd Arsenault '99, assistant professor of art, who teamed up for their first tornado chase in 1999. The results include an atmospheric addiction, inspired artwork, entrée into an intriguing subculture and so much more.

Revelation in the Heartland

Growing up in the Midwest, some of Davenny's earliest memories are of big storms coming off Lake Erie, which inspired an interest in movement and light. In the late '90s, he decided to re-examine those interests up close. He connected with Joshua Wurman, formerly with the University of Oklahoma and now with the Center for Severe Weather Research in Boulder, Colo. The venerable leader in tornado research was willing to let Davenny tag along on the next storm-chasing trip. When a colleague of Davenny's who was supposed to assist cancelled at the last minute, Davenny reached out to a student who he knew would be up for the challenge.

"I knew nothing about tornadoes," Arsenault admits. "But we left the morning after I graduated—six in the morning, still on the graduation high—and heading out to track one of the worst tornadoes in history. The week before, it had one of the highest wind speeds on record—"

"Yeah. That was the week before we went out there, and it went right through Norman [Okla.]."

"North of Norman, right. And we flew over the path of the tornado as we came in, and so looking down, we saw this, like—"

"My throat sank to my stomach. You know, I grew up in Connecticut, so there wasn't that sense of space, and the weather didn't have that same presence."

Thinking back to that first trip in 1999—the one with no cell phones, no GPS—made both men smile and shudder, recalling the excitement and terror as they trailed a group of scientists and a mobile Doppler radar van heading directly into the storm.

"Visually, it was a revelation," Davenny says. "We didn't see any tornadoes, but we got to see just massive storms. The scientists would go to the point at which the storm was beginning to build, and in essence we would watch the thing evolve and grow."

The pair returned to Pennsylvania with hundreds of images (back then, they were on film), hours of video footage and an appetite for more.

"We definitely became kind of addicted," Arsenault recalls. "During that first trip, we were trying to figure everything out. The second time we were out there, we were really prepared—better equipment, safety things like lights for the car, even a Dickinson logo for the car."

And while they could always count on needing insurance to cover the damage to the rental cars each trip, they soon discovered that was about the only thing they were prepared for. No two trips were alike, no two tornadoes look or act the same and no amount of preparation could provide a complete sense of security.

"Going back multiple times teaches you what to look for, where there might be fruitful visual experiences," Davenny says. "As you experience it more, the impact on you is greater."

With six chases together under their belts, Davenny and Arsenault can look at an image in their archive and recall the exact date, location and intensity of that particular instant.

"We're looking for that very specific moment or experience where it's just unlike anything you've ever seen," Arsenault says. "That's what kept us going for it. Can we see something better?"

"Or something that will make your jaw drop-and that's almost always the case," Davenny adds. "Every time it's something different and surprising."

As the intrepid artists became regulars in Tornado Alley, they discovered a physical and a sociological world they never knew existed. Logging an average of 6,000 miles per trip, they would zig and zag through tiny towns and no-man's-lands from the Deep South to Canada and back again.

"When you're driving from Texas up to the Dakotas, just seeing how the land changes—at times it's like you're on another planet," Arsenault says.

And the people seemed otherworldly as well, from the quirky inhabitants of these remote, storm-ravaged locales and thrill-seekers embedded in the tornado-chasing sphere to psychologists studying fear reactions, poets and writers attempting to tell the stories and scientists studying the phenomena amidst the chaos.

"This subculture of tornado chasing was something we had no idea about," Arsenault explains. "There's this whole subset of people who are obsessed with these storms. A lot of people can't even verbalize why they're drawn to it: It's a quasi-religious experience for them, and they leave work and travel in convoys or caravans. And it's interesting how they can clash with the scientists sometimes—it's what they call a convergence when everyone descends on the same storm at the same time, and it gets dangerous. And this was before reality TV, so after that started, it just got totally out of hand."

Davenny nods and adds, "What's interesting about the subculture is that we then became part of it. People would see us and say, 'Oh, those guys are the artists.' "

What the artists saw

Setting aside all the scary moments, the unconventional characters and the scientific lexicon, the goal of these trips was always about gaining inspiration to create art. And while neither Davenny nor Arsenault produce literal representations of tornadoes, their work has manifested in different ways.

"As artists we are really interested in communicating the experience," Davenny says. "So when you're in a situation like that, the experience of it is so overwhelming and profound that it really gives you a sense of intensity, and then wanting to communicate that somehow.

"If I were to characterize Todd's art, his is a bit more metaphoric," Davenny continues. "It's sort of the explosion of things, the outward sense of something flying, barely contained chaos. For me, it's much more about atmosphere, movement, light."

Arsenault agrees, adding, "What's interesting for me is I started doing this at a very formative time. So for a long time I was figuring out my artistic identity through all this. I was initially drawn to the atmosphere and the light, and I grappled with how to represent it. I started to have different interests visually and got into things like chaos theory and entropy."

They also explore a variety of mediums, from charcoal and paint to photography and video.

"The video really embodies the trips because there's the visual components of the storm, but then you feel the tension of the chase and there are great moments where we're yelling at one another," Arsenault says. "It isn't just about the storms."

They also are collecting images and artifacts of other discoveries they make on their travels.

"Some of the roadside art is absolutely phenomenal—it's outsider art," Davenny begins. "People would, for no monetary gain, create crazy constructions on their property, out of stones, out of old cars, out of scrap metal … everything you could imagine, really. Everything from aliens to Biblical—"

"And both together! Aliens with Jesus in these huge sculptures."

"We have a whole folder of roadside art for the slide library here."

"Yeah, we got a lot of ideas for subprojects. I started collecting record albums, and I'm working on a book of these religious record covers. I've accumulated like 1,200 of them now. But that's a different story."

"Anything we do in research comes back into the classroom in strong ways," Davenny says. "This was why I started regaining an interest in photography, learning Photoshop. And we have to critique all kinds of work—our students are working in ceramics, in sculpture, photography, video."

"I think it made me more aware of the landscape around here," adds Arsenault. "It's got me to take students to different locations—Adams County, where the apple orchards are, where there's this intrinsic connection between land and sky."

"That outsider art too, bringing that back to the students," Davenny continues. "That someone would use cars or scrap metal to create some kind of experience or environment out there gives you an impetus to convey that possibility to students—that the imagination doesn't end at the canvas."

They also admit to having become addicted to the Weather Channel and online weather radar, tracking storms as they move into the area, including the recent Hurricane Sandy.

"We have a much greater understanding of the science and why, in the Northeast quadrant, if there's a hurricane, there are often tornadoes too," Davenny explains.

"We spent a lot of time locked in hotel rooms watching the Weather Channel or just looking at the Internet and tracking storms, so whenever there's a big weather event, you feel like you're right out there," Arsenault says. "Also how you're interpreting the information the media is putting out there, because we've been in that interesting position of hearing what the scientists are saying versus what the media puts out here, so we've become critical and often skeptical."

"We can look at a storm and pretty much know what the structure is, what is likely to come, what the struggles are that are going on in the storm, that most move from southwest to northeast," Davenny says. "We can see rotation, the hook, the wall cloud, the wind shear, the whole structure."

So until their next chase, likely in 2014, you may find the artists huddled over a computer monitoring weather radar or pulled over on the side of the road photographing some looming clouds. While Davenny notes that they don't need tornadoes to find awesome visuals, they do enjoy the chase.

"It's a waiting game," Arsenault explains. "You could wait hours and hours to see a few minutes of something amazing. It's all about the journey.