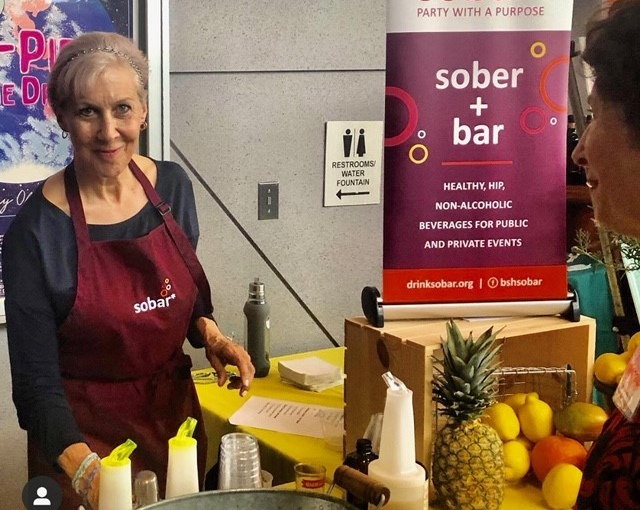 'It's such a Dickinson story,' says sober-bar entrepreneur

Beth Sandbower Harbinson ’81 and Emily Schrader ’93 wanted to help people in recovery by creating special opportunities to socialize without alcohol. They called their sober-bar business “Sobar.” Only thing was: Harbinson and Schrader lived 1,700 miles apart. They’d never met. And they knew nothing about one another’s plans.

How did two Dickinson alumnae launch separate, similar businesses with the same name? And what happened when their paths crossed?

This tale of two Sobars begins with Harbinson, the first to graduate from Dickinson and the first to set up shop.

Harbinson lives in Maryland. After working at the executive level in sales, business, marketing and nonprofits, she founded a nonprofit-leadership consulting group in the Baltimore area. She’d been running it for five years when she was diagnosed with alcohol abuse disorder.

“It was kind of shocking, because I was successful and involved in my community,” says Harbinson, now 14 years in recovery. “I didn’t fit the stereotype of what someone with that diagnosis is like.”

Inspiration for a sober bar arrived a few years back, when Harbinson was at a concert with friends. Her VIP ticket included access to a backstage reception, which featured a seductively backlit bar. While friends sipped fancy cocktails, Harbinson ordered her usual—an uninspired seltzer with lemon. That got Harbinson thinking: Wouldn’t delicious alcohol-free drinks, served away from the temptations from the traditional bar, help those in recovery stay on track? And wouldn’t everyone who didn’t want to imbibe on a big night—designated drivers, those on certain medications and the “sober-curious” among them—benefit?

Schrader is a therapist, also in recovery. Realizing the importance of social support for those battling addiction, she wanted to help build community and social connections in an alcohol-free setting. She also hoped to create job-training and employment opportunities—and the resulting built-in support networks—for those newly in recovery.

“After treatment and after-care and individual counseling, people in recovery have the whole rest of their lives to try to maintain sobriety,” Schrader says, “and while there are a lot of meetings out there, there aren’t a lot of other types of social supports. The more I started talking to people about it, the more I realized there’s a real need.”

Having worked in restaurants before graduate school, Schrader understood the community-building power of food. Her goal: to launch Denver’s first sober-friendly restaurant, a nonprofit staffed by persons in early recovery. Fundraising for a brick-and-mortar restaurant was challenging, so she’d begin with a catering business, offering wholesome food and a pop-up sober bar serving nonalcoholic drinks. She’d already thought up a great name.

From idea to launch

Harbinson entered her business plan into a contest that, like Dickinson’s Innovation Competition, provided seed money for startups serving the common good. The $10,000 prize funded the launch of her pop-up bar, Sobar, in 2017. She trademarked the name and got the ball rolling.

Schrader refined her idea for her own Sobar over several years, and after establishing her own counseling and consulting business, she felt ready to take the leap. She was already finalizing menus and signs when she got a message that she wouldn’t be able to use the Sobar name.

That 2018 message was from Harbinson, who’d learned about the copyright issue from her lawyer. Looking up Harbinson on LinkedIn, Schrader discovered a common Dickinson connection. She got in touch. “We talked about our experiences and our shared connections, and we really hit it off right away,” says Schrader. “It was actually a lot of fun.”

Beth Sandbower Harbinson '81 (left) and Emily Schrader '93 catch up via Zoom in August. The two met while both establishing businesses for those in recovery and those who are sober-curious.

Both organizations have seen significant changes during the COVID-19 pandemic. Responding to the availability of home-delivery alcohol during the pandemic in Maryland and elsewhere, Harbinson has developed a Sobar-in-a-Box delivery service. The 2020 New Year’s Eve Sobar Soiree has moved online, with expanded virtual programming for families. Harbinson is also launching a Sobar Stories interview series, with the aim of shattering stereotypes about alcoholism and mental illness. Bar Zero has hosted a few virtual events since the pandemic outbreak, but because of Bar Zero’s focus on in-person connections, operations are largely on hold. Like most in the food-service industry, she’s hoping for the best as she continues her work in therapy and consulting.

Schrader and Harbinson connect a few times a year to swap ideas and catch up. They look forward to meeting in person one day.

“It just seems like this was meant to happen—that two people from different generations at Dickinson would connect, resolve a business issue in such a collaborative way and become resources for each other,” says Harbinson. “It’s such a Dickinson story.”