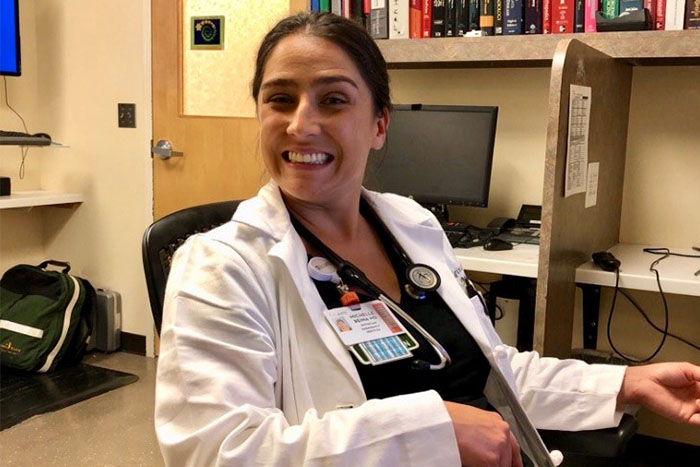 Consuming images and stories of daily life in a hospital emergency department has become a part of everyone else’s daily life over the past few months. But for Michelle Reina ’05, a doctor in southern Oregon, it’s all been very personal.

“The biggest challenge for me was emotional—and separate emotions in the workplace versus in my personal life,” says Reina, whose hospital is dead center between San Francisco and Portland, two early COVID-19 hotspots. “It seemed like it wasn’t if it would hit—it was when and how hard. So the fear and anticipation of that was on my mind constantly.”

Once the virus was a reality instead of something Reina too just observed from afar, the challenges that she anticipated became fodder for questions that most people wouldn’t want to have to answer.

“Do I quarantine myself outside my home and away from family?” she asked herself. “How do I do that as a nursing mother? How do I pump milk at work without contaminating it? There were just so many unknowns that it was impossible to know the right thing to do. And the stakes were high.”

And questions at the hospital were coming just as urgently, a big one being how to decide which patients were high risk enough to warrant dipping into the precious stores of personal protective equipment.

“Because the presenting symptoms weren’t clear—and are still highly variable it seems—that meant gowning, gloving and masking a lot more than we normally would,” Reina says, noting that all of this drained both her time and efficiency. “It also doesn’t set you up very well for a warm-and-fuzzy patient interaction when you’re in a hazmat suit.”

Luckily, the COVID-19 caseload never did overwhelm the hospital, and cases flattened. But patients certainly noticed the extra effort being put in by everyone around the hospital to keep the facility and everyone coming through its doors as safe as possible.

“Gratitude is not something we expect or hear often in the emergency department,” Reina says. “But we have been getting thanked a lot for coming to work.”

Read additional alumni perspectives in the "Faces of the Fight" feature, part of the summer 2020 issue of Dickinson Magazine.