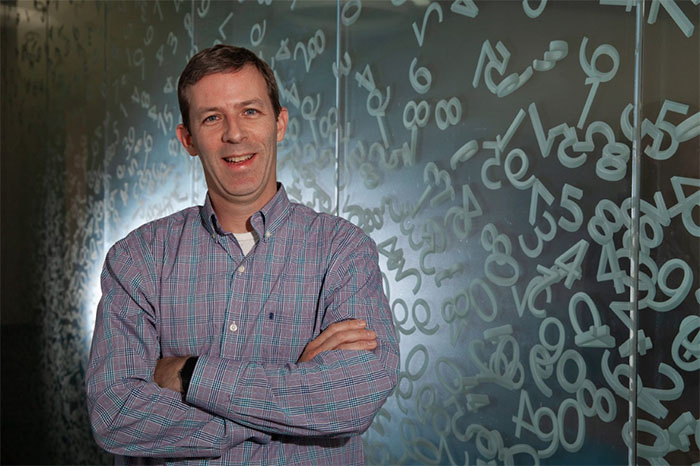 Professor of Mathematics Dave Richeson has always loved math, and as a college student, he also discovered a love of writing. Both of those passions combine in his book Tales of Impossibility: The 2000-Year Quest to Solve the Mathematical Problems of Antiquity (2019, Princeton University Press), a look at the history of four of the most famous problems in mathematics—the "problems of antiquity."

In his discussion of the book below, Richeson reveals what captivates him about the problems of antiquity, why the history of these problems is so long and complex and why his dual love of math and writing fits in beautifully within the Dickinson educational model.

So what are the problems of antiquity?

The so-called “problems of antiquity” are arguably the most famous problems in the history of mathematics. In a geometry course, high school students learn how to perform geometric constructions following the Euclidean rules—they are allowed to use only two drawing implements, a compass for drawing circles and a straightedge to draw lines. Some familiar high school problems are to draw a perpendicular bisector to a given line segment, to construct an equilateral triangle, and to bisect a given angle. The problems of antiquity are just as simple to state, but unlike for these school exercises, the ancient Greek geometers were unable to solve them. One of the problems asks for a procedure that would trisect any angle—that is, to divide a given angle into three equal parts. Another is to construct all possible regular polygons, such as the regular seven-sided polygon. The most famous is the problem of squaring the circle. For this problem, we are given a circle, and we must use a compass and straightedge to construct a square of the same area. Tales of Impossibility tells the 2,000-year story of these problems, which ends with the surprising twist that they are all impossible to solve.

Tell me a little about your interest in writing about this topic.

Euclid’s Elements, which was written in 300 BCE, is one of the most influential books ever written. My original idea was to write about its influence on mathematics. I soon realized this was far too large of an undertaking. I decided to narrow my focus to the problems of antiquity. I developed a deep love and fascination with these historical problems, and there was no turning back.

Why is the story of these four problems such a long and complex one?

Did you face any challenges during the research and writing process?

As it turned out, the most challenging part of researching and writing about these problems was deciding what not to include in the book. These problems were so famous for so long, and so many important mathematicians worked on them that there was far more than one book’s worth of material. In fact, I had most of the book written by the summer of 2018, but it was far too long, so I spent the entire summer cutting, streamlining, combining and reorganizing, trying to efficiently tell this remarkable story.

Did you write Tales of Impossibility with a certain kind of reader in mind?

I wrote the book for a general audience—anyone with a solid high school math background should be able to understand the book. That said, unlike some popular science books that present ideas at only the highest level and avoid technical details, I do not shy away from writing about the mathematics and presenting mathematical arguments. So it does require some thought and attention. It is also a scholarly work with an extensive bibliography and endnotes. I believe I have brought together a lot of ideas that will be new to many mathematicians.

What’s something you learned in the process of researching this book that surprised, delighted or fascinated you?

One surprising thing I learned was that David Leisk, better known by his nom de plume Crockett Johnson and author of comic strip Barnaby and the Harold and the Purple Crayon series, became interested in mathematics late in his life. He painted over 100 geometrical works, 80 of which are now in the Smithsonian. He became interested in the problems of antiquity, and they were the subjects of several of his paintings. In fact, he actually published a mathematical article that is related to the construction of the regular seven-sided polygon.

I always loved mathematics. The only written comment on my first-grade report card was “David particularly enjoys math.” But I didn’t really know anything about the history of mathematics until my sophomore year of college, when I picked up—on a whim—Journey Through Genius, a book about the history of some of the greatest theorems in mathematics. I loved it. I have been interested in the history of mathematics ever since. The funny thing is that the author of the book, Bill Dunham, lives here in Pennsylvania, and I have since gotten to know him quite well. He and his book were very influential to me and my career path.

Growing up I would have said there were “math people” and “writing people,” and I was one of the former. But eventually I realized that that was not true. I came to enjoy writing—especially when it was on a topic I was interested in. Today, I love the challenge of conducting research, taking the jumble of interrelated facts, organizing them, writing, revising and producing a document that people can read, understand, enjoy and learn from. In fact, much of my career has centered around writing—be it research articles, my two books, memos, teaching writing or editing the writing of others. Writing is an essential skill that everyone should learn, regardless of their area of study or career plans.

I am a product of a liberal-arts education. I have always loved mathematics, technology and the sciences, but in college I took numerous writing classes as well as classes in the humanities, social sciences and the arts. I love to read both fiction and nonfiction. I am thrilled that I have been able to find a way to combine all of these interests in my scholarly work, and I am grateful to be at a college that values this kind of scholarship.

A 1993 graduate of Hamilton College who earned his Ph.D. in math from Northwestern University in 1998, Richeson has been teaching at Dickinson since 2000. His research focuses on dynamical systems, topology, the history of mathematics and recreational mathematics. The editor of Math Horizons, the undergraduate magazine of the Mathematical Association of America, from 2014 to 2019, he published his first book, Euler’s Gem: The Polyhedron Formula and the Birth of Topology in 2008, also with Princeton University Press. In his free time, he enjoys writing about math on his blog, Division by Zero, and on Twitter at @divbyzero.