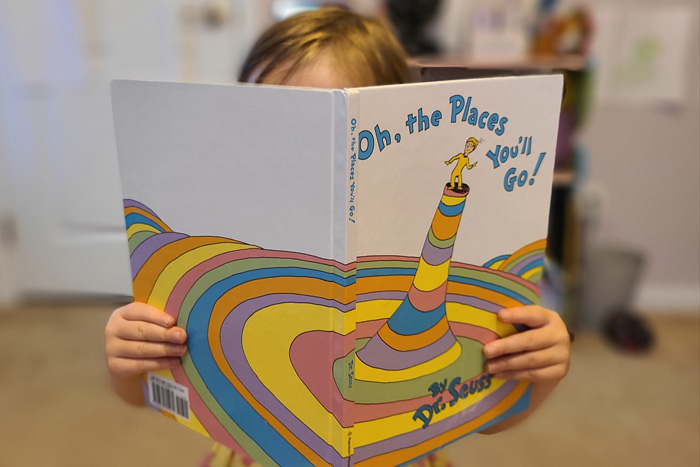 Inspired to ask the tough questions

What can classic children’s tales teach us about philosophy? Students in Dickinson’s Philosophy Collective and Assistant Professor of Philosophy Amy McKiernan found out this school year, when they used children’s literature to help Hamilton Elementary School students answer some of life’s most profound questions.

Not long after McKiernan was introduced to Thomas Wartenberg’s program for practicing philosophy using children’s books, she knew that it would serve as the perfect launchpad for a unique project involving her students and local elementary school students. Wartenberg’s book, Big Ideas for Little Kids: Teaching Philosophy Through Children’s Literature, helped her outline an entire curriculum focused on introducing philosophy to children in the Carlisle community.

In consultation with the teachers at Hamilton Elementary, McKiernan's student volunteers chose to read Dr. Seuss’s Oh the Places You’ll Go, Arnold Lobel’s Frog and Toad Together, Kevin Henkes' Chrysanthemum and Eve Bunting's Fly Away Home. They began dissecting the nursery rhymes and tales. “We started looking at simple yet thought-provoking questions and concepts in the books,” said McKiernan. “The Dickinson student-teachers would pose questions like, ‘What does it mean to be perfect?’ or ‘Why is it important to see other perspectives?’ And from there, the conversation flourished.”

Initially, they held a pilot session at the Dickinson College Children’s Center, and after seeing success, the administrators at Hamilton Elementary opened their classroom to the student-teachers, or “Dickinson Scholars” as the third grade students referred to them. Over the course of four 30-minute sessions in the fall and three in the shortened spring semester, the Dickinson volunteers equipped the young students with the tools to dig beyond the surface of the stories. “We wanted to emphasize empathy and mindfulness by asking questions they could answer," said Nick Serensits ’20 (philosophy). "We wanted them to really think about why they do what they do or say what they say."

“The questions and discussions encouraged them to use their imagination, to self-reflect and think creatively and see perspectives different than their own,” said Annaliese Tucci ’20 (international studies, Italian studies).

Rebecca Fox ’22 (art & art history) and her partner read Frog and Toad Together to their class, and asked the third graders how they know if they’re dreaming. “They took some time with it," said Fox, "and I think they’re not always used to having time to think through what they’re saying or develop their view, so we made sure we gave them plenty of time.”

“My favorite part of the program was helping the students develop premises for their own views on philosophical topics," he said. "Being able to ask them what they think and helping them develop reasons for why that’s so, or perhaps change their perspective based on those around them, is so rewarding.”

During one session, Tucci recalls asking the class, “What does ‘life is a great balancing act’ mean?” and their answers astounded her. “One student described how it was about the ecosystem, and how every part is just as important as the whole," she said. "And I realized that we were learning from them as much as they were learning from us.”

After discussing how successful the program was and what can be improved, the teachers at Hamilton, McKiernan and the student volunteers hope to continue the program when schools resume operations. “I think this is a great way for students to get involved in the community and learn," said McKiernan. "This program exposes you to so much, and students who might not have had an interest in these topics before find themselves just as excited as I am to resume the program."

Fox echoed her professor’s excitement. “We do this not only because we’re interested, but also because it’s a benefit to the teachers," she said. "If we can do something that helps them and the students by all means, let’s do it!”