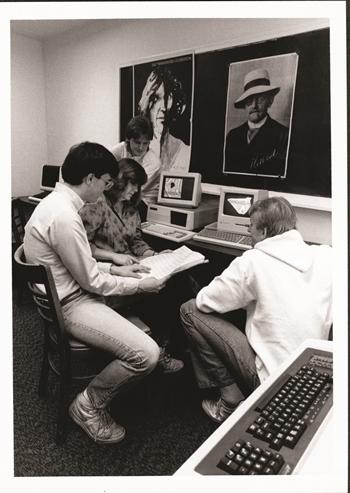 Dickinson has been known for being on the cutting edge of technology, often implementing new systems, processes or gadgets before many of its peer institutions. Bob Cavenagh, retired associate professor of art & art history, offers a firsthand account of instructional-media upgrades through the years.

The early 1970s at Dickinson were the days of 16 mm film and reel-to-reel tapes gradually being replaced by cassettes, LP records and 35 mm slides. The college had spent around $100,000 on a Chester dial-access retrieval system, which allowed students to listen to language tapes in Bosler Hall and to music in the library, but the system proved to be a real dog and we replaced it with a home-brewed system for making copies of cassette tapes. This had its headaches but was much more useful, and it continued for many years until replaced by Web-based types of access.

The art department built a huge collection of 35 mm slides (still exists). Faculty took their own slides, and we copied other work for them. That medium was probably the top way of visualizing things in the classroom.

In 1972 the college possessed just one useful videotape recorder—long before the VCR. The education department used it to record the performances of student teachers. These were costly, and it took a long time to establish useful video for classrooms. That happened after Betamax and VHS VCRs hit the market. Early camera/recorder rigs followed, so we could and did make our own videos for both coursework and for field research. There also were a couple of portable reel-to-reel recorders for field-audio recording. We also acquired systems to convert European PAL and SECAM format tapes to the United States National Television System Committee format, and vice versa, so we could exchange video with our international sites.

The late 1970s brought the first personal microcomputers: Atari, Commodore, Apple, Sinclair. We and the physics department became heavily involved with getting the college to consider this new technology, despite protests by the computer center. The college first purchased a number of DEC Rainbow computers using MS-DOS. They were very good machines, but they didn’t receive the same development support as the IBM version of the MS-DOS system and were gradually phased out in favor of IBM and the Macintosh. Today of course, such things are ubiquitous.

The ’80s brought satellite television, and we dove in with both feet, creating custom receiving systems to capture signals from Europe, Russia, South America, etc., and we created a low-budget campus cable system to bring these signals to classrooms, language residences and faculty offices. This proved a very important source of international information for language teaching and for news—we watched the Chernobyl disaster on Russian television.

We also began a series of international and national teleconferences, with links to places as far away as Australia. Dickinson was one of the first colleges/universities to make teleconferencing a regular part of the learning process. We also began creating “smart” classrooms with video projection in the ’80s, and by 2000 we had a higher density of these than any other college I can recall. This all may seem simple in today’s world of the Web, but in the ’80s it was cutting-edge technology.

The year 1994 brought the World Wide Web, with all the changes that has wrought, and soon came all the newer technologies familiar to us today. The iPhone, iPad or personal computer can accomplish (at some level) every single one of the entire gamut of technologies we supported in 1972.