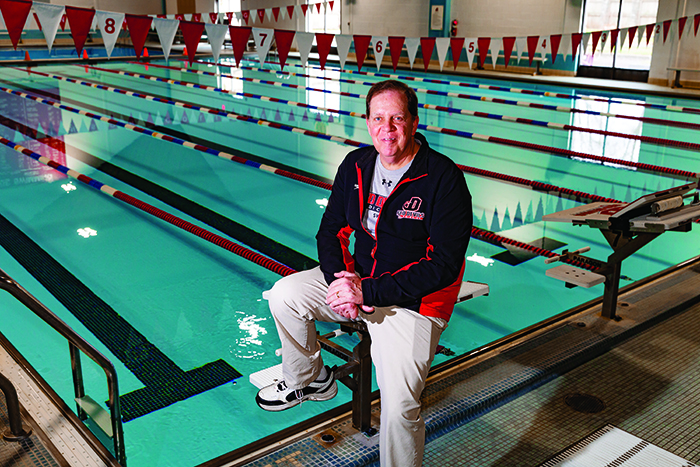 Imagine how many collegiate coaches would love to have a single-school record of 372-198-1 over the course of 26 seasons. Then think about the student-athletes he’s coached: four Centennial Conference Outstanding Performers, nine All-Americans, 217 All-Conference honors, 58 CC champions. It’s a stunning achievement across the board, one to be widely celebrated, as Paul Richards, Dickinson’s head swimming coach and role model and mentor to hundreds of Dickinson swimmers, retires.

“It takes a special person to connect with a team like Coach does with his swimmers—he knows how to motivate on so many different levels,” says Carson Gannon ’14 (psychology), whose women’s squad went 10-3 her graduating year. “Coach’s leadership and attitude is contagious, and everyone lucky enough to be under his wing can tell he has a passion for swimming that runs through his veins.”

Along with the success he fostered in the pool, Richards’ women swimmers received Scholar All-American honors every single semester, while the men's team accumulated a streak of 48 consecutive semesters, and his influence has extended into the lives of each student he’s coached.

“For me personally, Coach has been my biggest mentor in my college career,” says Tyler Catania ’21 (political science, international studies), who credits Richards with teaching him how to be a better teammate and leader. “Coach has always been there for me, through my good days and my bad days. And he has always believed in me, especially when I did not believe in myself.”

Coach Richards’ support for others doesn’t end at Dickinson’s limestone walls, and he was the longtime advisor to Scroll and Key, Relay for Life and Spectrum. He’s also known locally for his active participation in community causes, such as the Nondiscrimination Ordinance passed in Carlisle in 2016.

“Coach is a huge reason this ordinance passed, and since that moment on that chilly, beautiful, powerful and inspirational night, I have never seen him back down from a fight for vulnerable populations everywhere,” says Olivia Lyman ’19 (international studies), who notes that Richards was always a driving force for her personally as well. “I wouldn’t be standing where I am today without Coach. I am forever indebted to this man, and I know with confidence that I am not the only one.”

Richards has been part of three of his athletes’ weddings over the years, and he says his phone often rings at the birth of a future Dickinsonian. And while he’s looking forward to spending more time with wife Jeanette, son Paul and chocolate lab Jake, the thing Richards will miss the most is being surrounded by people who feel about him as he does about the college.

“I know it sounds cliché, but we really were, and still are, a family,” he says. “I’m grateful for the opportunity that Dickinson gave me—to be a part of a community that encouraged me, supported me and helped me to become a better coach, a better teacher and a better person. Dickinson has been the perfect place for our family and for me professionally.”