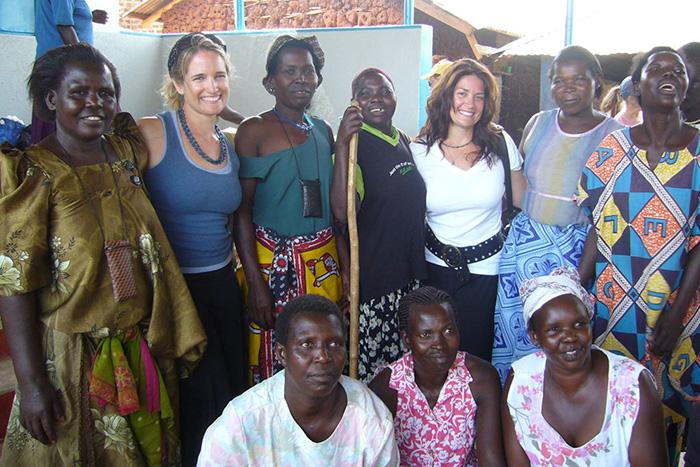 It’s the middle of the night in a quiet Pittsburgh suburb. Heather Lingenfelter Ditillo ’92 glances at the number on the thermometer as she strokes the hair of her youngest son, Theo. She’s certain he has strep throat and goes to her medicine cabinet for items to ease his discomfort and lower his temperature. After tucking him in, Ditillo perches on the edge of his bed and cries uncontrollably.

She has just returned from Uganda and can’t shake the thought that her son is alive and healthy because she has that medicine cabinet. But what about all those mothers and their children dealing with the poverty she just witnessed firsthand? The next morning she makes a life-changing phone call.

Ditillo traces her strong sense of empathy to her own childhood.

“It stems back to my parents’ divorce when I was young,” she recalls. “I went to counseling, and I loved it and loved my therapist. I decided at 12 that I wanted to be a child psychologist.”

Being raised by a single mom on a budget, she never imagined a school like Dickinson would be an option for her. But thanks to financial aid, she attended and was a volleyball player, a Blue Hat, an athletic trainer, a member of Kappa Kappa Gamma and a resident advisor. She also was the first Dana Intern at the just-built Dickinson College Children’s Center.

Ditillo was an eager scholar in the psychology department, taking classes in child, neuro and developmental psychology. That widespread interest laid the groundwork for a multifaceted career.

Her first job after Dickinson was teaching for Head Start in her hometown of Hollidaysburg, Pa.

“That was a direct use of my child-psychology studies and Children’s Center experience,” she says. “I loved the kids and their energy.”

Ditillo soon became interim director of a family-support center, a one-stop shop for low-income families that provided everything from food stamps to parenting classes. This position gave Ditillo her first grant-writing opportunity, which got her started as a “reluctant consultant.”

“I was in my early 20s and people started approaching me to write grants for them,” she recalls. “I didn’t think I had enough knowledge and experience to do it, but the people around me did.”

As Ditillo took on more consulting work, she enrolled in the University of Pittsburgh to earn her master’s in social work, plus a certification in nonprofit management.

Everything was going great. Ditillo was fulfilled in her work, married to husband Jeffrey and raising a family in a close-knit Pennsylvania community. But all that was about to change thanks to Ditillo’s sister, Tera Herman, and some handmade beads.

BeadforLife is nonprofit based in Colorado that connects impoverished Ugandan women with resources to support their independence. With financial assistance, the women launch businesses selling handmade bead jewelry crafted from recycled paper and cosmetics made from indigenous shea nuts.

Herman hosted a BeadParty—like a Tupperware party with a greater purpose—and sent her sister a few of the products. When Herman signed up for a March 2007 trip to Uganda to learn more, she invited Ditillo.

“I had no intention of this trip having an impact on me or changing my life,” Ditillo says. “My role was to support my sister, who was searching for purpose and meaning in her life.”

Ditillo remembers the moment she stepped off the bus that drove the visitors from the airport to the village. The beaders surrounded them and welcomed them joyously.

“It was a circle of white and black all together,” Ditillo says. “I couldn’t help but cry, seeing these women sing and dance through poverty. They were so full of life. They’re earning an income, getting job training and sending their kids to school. It was amazing to see such hope because of the simple concept of recycled paper becoming beads that we market and sell. What a beautiful circle of exchange.”

When Ditillo returned home and spent that long night with her sick son, her thoughts kept returning to the children she had met in Africa.

“I didn’t know how to go back to living my life,” she admits.

She picked up the phone and called one of the BeadforLife directors who had organized the trip and expressed her desire to get involved. Ditillo and her sister joined BeadforLife’s Community Partner Program as regional representatives. Within six months, Ditillo had raised $10,000, and her sister had reached $40,000. Their goal was $3,000 apiece.

When the position of North American Program Director for BeadforLife became available, Ditillo was compelled to go for it. More than three years later, she knows it was the right move.

“My job is not only to educate people in the developed world about global poverty but to engage them to participate in helping to eradicate poverty,” Ditillo explains. She helped write a curriculum for youth educators to teach students about global poverty and how they can help. She also manages a team responsible for promoting and organizing BeadParties—10,000 of which have been held representing 70 percent of the organization’s funding.

“People are looking for ways to help in Africa but are overwhelmed by all the poverty,” she says. “BeadforLife provides a clear path to what people can do to make a difference. You know you’re changing the life of a woman or child across the globe.”