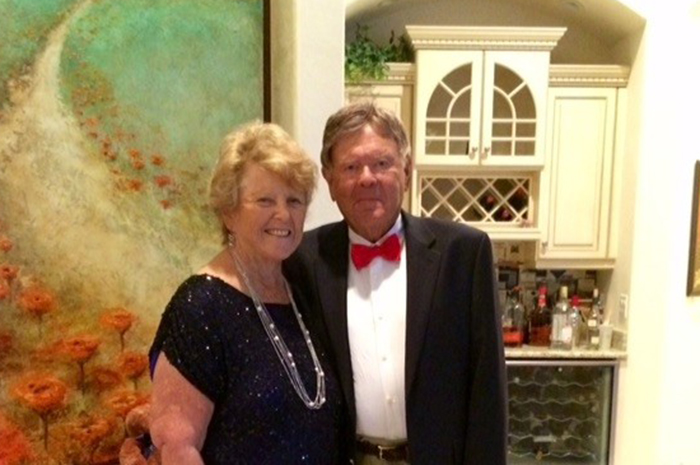 Doris Azin '60 and Dean Bennett '56 founded Bio-Med Devices, which is ramping up production of ventilators to help meet the needs posed by the COVID-19 pandemic.

Since the outbreak of the COVID-19 pandemic, officials and health care administrators have been working around the clock to secure needed medical equipment. And a company founded by a Dickinson husband-and-wife team is working around the clock to help meet the demand. Bio-Med Devices, established by Dean Bennett ’56 and Doris Azin Bennett ’60, is ramping up production for ventilators, a critical resource in these challenging times.

Dean, a New Haven, Connecticut, native, majored in physics at Dickinson and entered the Army after graduation. He met Doris—a Dickinson sophomore from NYC—while on Christmastime leave, during a blind date set up by his cousin, the late Sandy Hamrick Fisher ’60. They married the week after her graduation, and they’ll celebrate their 60th wedding anniversary, as well as Doris’ 60th class-reunion year, this spring.

Doris applied what she’d learned as a psychology major right out of the gate, during her first job as an employment manager, while Dean worked as a manufacturer’s representative for several companies, including Bio-Med Devices. They raised three children, Dean, Diane and Dia, and in the mid-80s, when an opportunity arose to buy out Bio-Med, the Bennetts seized the chance. The couple moved the company from Long Island, N.Y., to Madison, Conn., and they began operations with seven employees and a rented warehouse space. Beginning about 20 years ago, BioMed was nominated as one of 50 fastest-growing technology companies in Connecticut, year after year. As the company grew to include clients from more than 100 countries, the Bennetts enjoyed visiting client sites all over the world.

“From the very beginning, it was something that we did together,” says Doris, who served as CFO, while Dean filled the CEO/president role and still found time to attend each of their five-year reunions at Dickinson, and to maintain close friendships with a core group of classmates. “The early years were tiring, of course, as it is with any new business—you work long hours, weekends and holidays. But it was gratifying to see it grow.”

The Bennetts’ son, Dean, joined the company soon after his college graduation as a calibrator and eventually worked his way up the ranks to president and CEO. Doris retired in 2008, while her husband continues to serve the company as president of the board. The Bennetts’ daughters have also worked for Bio-Med, and one of Dean and Doris’ nine grandchildren, also named Dean, joined the family business last spring.

The company specializes in MRI-compatible transport ventilators used on ambulances, planes and ships in transit from one hospital to another as well as primary ventilators for patients ranging from neonatal-care infants to adults. Bio-Med produces two models, including one approved just last year by the FDA, as well as  air-oxygen blenders that can be modified to deliver oxygen for patients who don’t need a ventilator but who benefit from oxygen therapy.

Since the pandemic outbreak, the company has moved from producing about a dozen of these machines each week to roughly 250 and has added more than a dozen new employees. Former employees have also stepped in to help, as the company contracted with Connecticut Gov. Ned Lamont to fulfill statewide requests.

While he and Doris are now wintering in Naples, Florida, Dean keeps in daily contact with his son and the board as they weather this challenging time. “They’re working overtime, and seven days a week to help meet the demand,” he says.