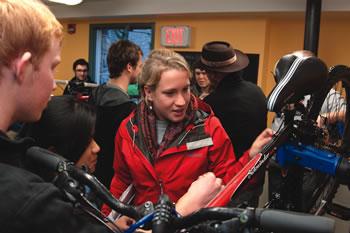 Megan Moody '13, former director of the Idea Fund's Web site and social-media efforts, gets some pointers on bike maintenance at the grand opening of The Handlebar on Oct. 27.

Now Dickinson has an answer for these questions—the Idea Fund. Launched last spring by a group of 20 students, the Idea Fund offers the campus community a place to bring any sustainability or community-building idea and turn it into a reality.

“There are a lot of people at Dickinson concerned about sustainability, and we wanted to have a place where anyone could bring their idea and get the resources to get it up and running,” explains Matt Guariglia ’12, the Idea Fund’s creative director.

To ensure that its initiatives achieve both environmental and economic sustainability, the Idea Fund operates as a revolving-loan fund, providing funding for turning ideas into initiatives that repay the fund through the savings or profits they generate. The notion of turning vegetable oil into fuel was already a reality at Dickinson’s biodiesel shop, a student-run project that has helped fuel campus vehicles since 2006, but when Sam Parker ’12 submitted his idea for a new reactor this fall, the Idea Fund’s board saw an opportunity to deliver two types of green. Now up and running after receiving a grant from the fund, that reactor is reducing the college’s carbon footprint and saving money that will be reinvested in the Idea Fund.

“The biodiesel shop got a lot of new equipment over the summer,” explains Anthony Silverman ’12, Idea Fund board chair. “But they needed a new reactor to be able to use this equipment and increase their capacity. Once the idea was brought forward, we looked into it and saw that they could save enough money to repay the grant by the end of the year and provide an additional $500 per year over the next five years to help fund future ideas.”

That other “wouldn’t it be great” idea, which came from Avery McGuire ’13 and Lauren Bruns ’13, resulted in The Handlebar, a bicycle repair and education center the Idea Fund helped set up in the lower level of Davidson Hall. This semester more than 40 students involved in the Idea Fund are working on projects that range from creating rooftop gardens on campus to developing a graywater recycling system.

Silverman’s idea for the fund backing these other ideas grew out of his experience in 2009 with Dickinson’s Socially Responsible Investment Group, which aimed to align the college’s investments with its mission. As the group investigated socially responsible investment strategies, revolving-loan funds caught Silverman’s eye.

“It seemed like a model we could bring to campus that would help people think about their projects with a triple-bottom-line approach,” he explains. “You can do something better for the community, but at the same time it has the ability to be self-sustaining and give back even more.”

Last spring he began discussing the idea for the fund with other students. The group drafted a plan and presented it to President William G. Durden ’71, who was impressed enough to offer seed funding. After launching the Handlebar and providing the biodiesel shop with its new reactor, the Idea Fund is currently working on a bike-powered campus coffee cart, selling fair-trade coffee.

The Idea Fund could soon see a substantial boost in funding, with alumni like Steve Spengler ’81 increasingly looking to make gifts backing sustainability efforts on campus. The Kenneth C. Spengler ’36 Sustain-ability Education Fund, which Stephen and his brothers recently established through a gift to the college in memory of their father, will fund sustainability-educational initiatives that embrace entrepreneurship.

“The Idea Fund projects are exactly the types of things we thought would be interesting to support,” says Spengler, whose father was deeply concerned with climate change as the executive director of the American Meteorological Society. “The opportunity is to create projects that can sustain themselves over the long term and at the same time bring in a multidisciplinary approach that embraces Dickinson’s focus on the liberal arts. … Future competitiveness depends on the next generation to create these kinds of sustainable technologies and business practices.”

If Silverman, who will graduate this spring with a self-designed major in innovation, entrepreneurship and the green economy, is any indication, the Idea Fund is doing just that. “This has become a sort of capstone project that fits in perfectly with my major,” he says. “It’s exactly the kind of work I want to do after I graduate—helping communities embrace sustainability in ways that help the environment and deliver on the bottom line.”

With its focus on community engagement, the Idea Fund also seems sure to take that lesson beyond Silverman and the other students on the fund’s board. “The great thing about this is that it really involves the entire community—students, faculty, administration and alumni,” says Guariglia. “We’re just nine people sitting in a room, and as creative as we are, we couldn’t come up with the ideas that have come in. So new ideas are always welcome.”