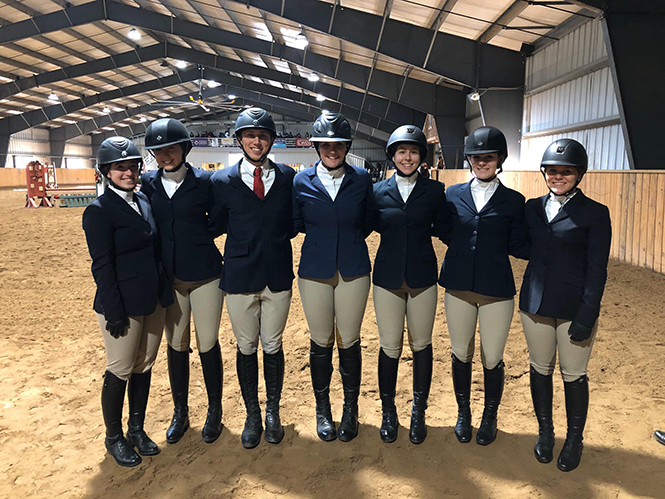 Members of the Dickinson Equestrian Team recently competed at the Tournament of Champions.

Dickinsonian Riders Compete Among the Best at the Tournament of Champions

Students on the Dickinson College Equestrian Team recently represented the college at the Tournament of Champions hosted by Penn State University at the nearby Grier School for girls. Competing against 17 other teams, including nationally recognized teams like Savannah College of Art and Design and Mount Holyoke College, Lara Dunkelberg '20, Peter Skutt '20, Kristen Acocella '21 and Sagan Schaffer '22 earned individual placings in several events.

“The tournament was created to bring the best teams together to compete in a ‘scrimmage.’ With the same level of difficulty in competition as seen at the National Final for the Intercollegiate Horse Showing Association (IHSA) hosted every year, the tournament gives teams an opportunity to test themselves against the top competitors within IHSA,” said Channing Pooley '20, the team's captain. “Almost every team invited is the top team from their respective region, along with some teams who consistently place second.” The IHSA is made up of 400 member colleges and universities, with over 10,000 riders representing those institutions.

Dickinson's team competes in the same region as the Penn State University team, a nationally ranked team with over 80 riders. Having that level of competition so close to home provides the team with a unique opportunity to learn from other great riders in the area and encourages them to compete at a higher level.

The team finished 14th in the Tournament of Champions, and Pooley was grateful for the opportunity to compete on such a large stage. “Being invited to the tournament to compete against such talented riders is a great opportunity for us to learn but also speaks to the talent we have on our team,” she said. “It’s a great honor for our team. It really recognizes the hard work we’ve all put in and the dedication our trainer, Lindsay Vulich, has given us.”

Since taking the helm as coach in 2004, Vulich has helped the team grow to over 30 members strong, including a consistently competitive show team.

“We've sent about seven riders to the IHSA national finals since Vulich’s arrival, and we only expect that number to increase with time,” said Pooley.