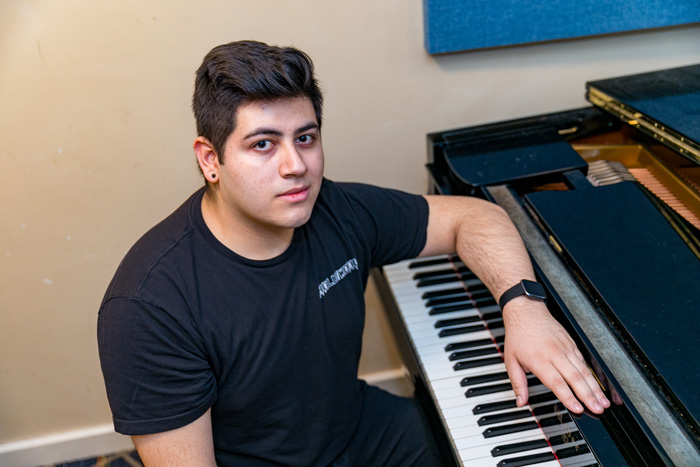 L.A. Posse Scholar Erik Gomez ’22 is laying the foundation for a meaningful career in the music industry. Last summer, during an internship at Warner Brothers, he collected and translated 500 clips to make the popular TV show Friends accessible to a Spanish-speaking audience. His ultimate goal: to secure greater representation for Latinx professionals in entertainment, in front of or behind the camera. Below, he discusses these plans, how he learned about Dickinson through the Posse Foundation, why he chose his major, the thrill of backpacking through Europe and more.

The Brief Wondrous Life of Oscar Wao by Junot Díaz.

Call Me by Your Name.

While looking at schools during my senior year, Dickinson College was not on my list. In fact, I hadn’t heard of Dickinson until I attended an informational presentation about the Posse Foundation and learned that Dickinson is a Posse partner college. It was then that the research happened—I started looking at information about Dickinson, and I took the virtual tour. Then I transitioned to YouTube and learned as much as I could about the school. Soon enough, Dickinson became one of my top 5 schools. I committed to Dickinson College Early Decision during my last semester of high school as a Posse Scholar.

One day during my astronomy class, a student asked the professor, “About how far apart are each of the planets from each other?” The professor reached for some tape measures and asked the class to follow him outside. Most of us then lined up, each representing a planet, and he showed us where to stand to represent each distance. It was this day when I felt like I was no longer in high school, being able to explore education through a more hands-on and interactive experience made things more interesting.

I decided I wanted to major in musical studies after taking piano lessons here at Dickinson. Where I’m from, not many us have this opportunity, and I wanted to take advantage of it now. My professors encouraged me, and after noticing how welcomed the music department made me feel, I was sure this was the right path for me.

After graduation I’m hoping to work in the entertainment industry. My ultimate goal is to make sure more of the Latinx community is represented, whether that’s behind or in front of the camera.

Another plan I have post-Dickinson is to open my own nonprofit organization for the arts in East L.A. to allow low-income students to explore the arts outside of school for free.

I was selected to be part of the Warner Brothers Entertainment REACH Honorship program. I get to intern within a variety of departments at Warner Brothers for four consecutive summers. The summer before I came to Dickinson was my first summer, when I interned with the studio operations department.

Last summer I had the opportunity to intern with Warner Brothers’ TV social media marketing team. During my internship I had the privilege of assisting with some of the Friends 25th-anniversary projects. My biggest project was to help create a Spanish version of Friends for YouTube. I collected and edited more than 500 clips and helped translate them into Spanish.

What appealed to me about this internship was having the opportunity to work on a project that used my bilingual skills. This was the first time I got to work on a great project simply because I was proficient on another language. After creating the content, it felt special knowing that by creating content in Spanish I was now targeting an entirely different audience. During the past two years at Warner Brothers Entertainment, I have learned the importance of networking, while creating a path for my future. I had several informational interviews with executives from the company to learn about what they do, so I can figure out what I want to do.

I know how to make a variety of mixed drinks with Mezcal! My dad owns a Mezcal distillery in Mexico, and when I was younger, I would help make drinks for clients or events.

Last winter a friend of mine and I backpacked through Europe without a plan; we just went from city to city and country to country. Being able to travel like that has always been one of my goals in life, and doing so made feel very accomplished.

The best thing about my Dickinson experience is having the opportunity to fully explore different subjects, allowing me to find something I really enjoy.