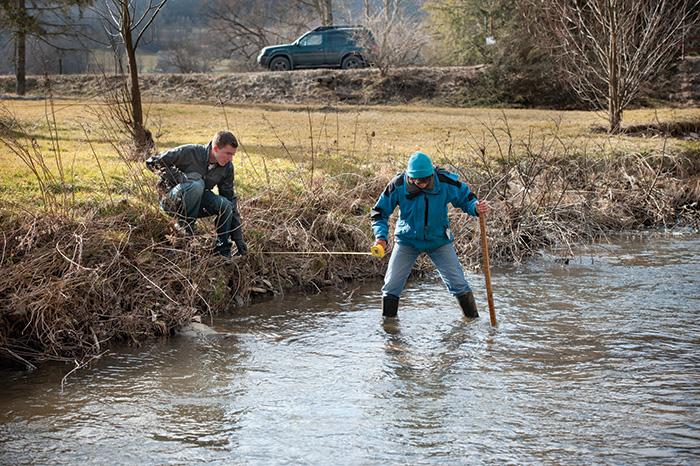 When ALLARM (the Alliance for Aquatic Resource Monitoring) was founded nearly 25 years ago, the dominant environmental problem was acid rain. Since then, the organization based in Dickinson’s environmental-studies department has tackled multiple water-related issues, such as agricultural runoff from concentrated animal-feeding operations (often known as factory farms) and stormwater management in Carlisle.

Now it’s at the vanguard of a statewide network responding to the veritable gold rush—and potential environmental disaster—that is natural-gas extraction in the Marcellus Shale.

“Over 25 years, we’ve tried to be responsive to [water-monitoring] needs,” says Julie Vastine ’03, director of ALLARM. “Unfortunately, the need is ongoing. This one just happens to be the issue of our times right now.”

Lying beneath New York, Pennsylvania, Ohio, Maryland and West Virginia, the Marcellus Shale covers 54,000 square miles. The gas-extraction process is relatively new, having only recently been tested in a similar formation in Texas. Hydraulic fracturing, or “fracking,” uses millions of gallons of water mixed with chemicals and sand to force fractures in the rock, thus releasing the gas for capture.

“Since 2005, 4,635 drilling permits have been issued—2,046 this calendar year,” says Vastine. “A lot of the drilling is taking place around what are called small headwater streams. These are in remote areas, harder to get to. These aren’t sites that an agency like DEP [Department of Environmental Protection] can get out to and do regular monitoring.”

The process also pushes anywhere from 10 to 90 percent of used water back to the surface. The briny soup, called flowback water, is stored on site and later transported to a treatment plant. “But throughout the state we’ve seen spills,” she adds. “We’ve seen incidents of pollution with flowback water.”

Since last November, ALLARM has been besieged with requests for information from all over the state. “People are looking for nonindustry answers,” Vastine says.

During her spring sabbatical, Candie Wilderman, professor of environmental science and ALLARM’s founder and science director, worked closely with Jinnie Woodward, ALLARM’s assistant director, and several student workers to develop a scientifically sound monitoring protocol that would be practical for volunteers yet robust enough to detect contamination. The protocol involves monitoring flow, testing of chemical indicators and visual assessment.

“The students were very important in this process,” says Wilderman. “They built the equipment for monitoring flow. They did background research. One of them developed training materials for accessing drilling permits online.”

Environmental-studies major Katie Tomsho ’12 of Hingham, Mass., was thrilled to be part of that process. “I had the opportunity to follow projects from brainstorming in the office to construction in the lab to presentation in the field,” she says. “It was fulfilling to know that we were on the front lines of a pressing issue and that people were relying on the protocol to provide them with the knowledge and skills to protect their water.”

In June and July, and with the assistance of Simona Perry, visiting postdoctoral scholar in environmental studies, the ALLARM team presented pilot programs in Bradford County and Emporium, Pa. Conservation organization Pennsylvania Trout Unlimited has since contracted with the team to deliver training throughout the state, and the Delaware River Network is using the program to monitor more than 30 stations in northeastern Pennsylvania.

Vastine adds, “Once we do our training, we [follow up] with quality assurance/quality control to verify that they’re using their equipment correctly. We also do an analysis for two signature chemicals—barium and strontium—that are not something volunteers can test for.”

Barium and strontium often are present when the stream is contaminated by flowback water, which may also contain benzene, arsenic, heavy metals and naturally occurring radioactive materials.

“We don’t realize it, but the smallest change in the quality of these streams and rivers affects life in almost every way,” says Giovania Tiarachristie ’13 of Pittsburgh, who helped assemble the training kits and crafted a user-friendly gauge stick for volunteers.

Meanwhile, ALLARM is collaborating with community and statewide organizations to track drilling activity, permit applications, spills, policy and regulation debates and much more. It also is working with the University of Pittsburgh’s Center for Healthy Environments and Communities to develop the online clearinghouse and database Fractracker.

“Whoever has the skills to address the issues just runs with it,” Vastine explains. “So PennFuture, Clean Water Action, Chesapeake Bay Foundation—those organizations tackle the policy. Our niche is the monitoring.”

“The number of wells being drilled is more than twice what they were last year,” says Wilderman. “In Pennsylvania, it’s ‘drill, baby, drill.’ Julie and I talked about this when I started my sabbatical. [ALLARM has] the skills, experience and resources to play a leadership role, so let’s do it.”