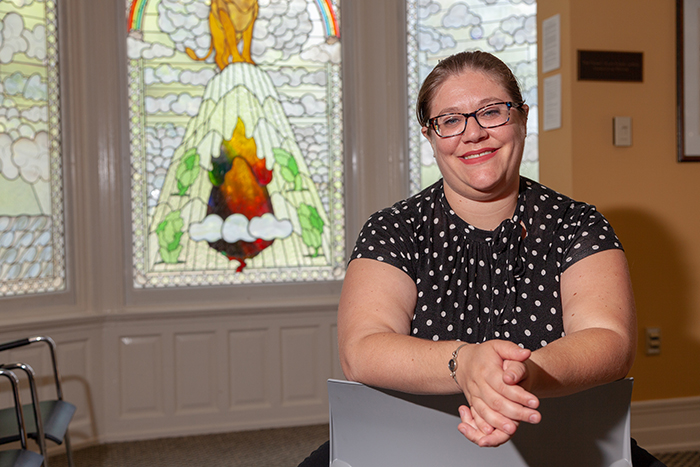 The Milton B. Asbell Center for Jewish Life has named Rabbi Marley Weiner its first full-time director since the center's 2003 inception. An Abington, Pennsylvania, native, Weiner joins the college from the University of Binghamton, where she was the first female Hillel rabbi in the university's history and spent two years there as the senior Jewish educator.

A liberal-arts college graduate herself, Weiner is excited to make Dickinson her new home. “I love [the liberal-arts] environment," she says. "As I was learning more about Dickinson, the commitment to sustainability was really awesome, and I’m grateful to work in a place that’s truly living out some values that are very important to me."

In her new role, Weiner will oversee the Asbell Center and its cultural events and Jewish Life. She also will serve as the head supervisor of the kashrut at the KOVE, a kosher kitchen and serving counter within Dickinson’s Dining Hall. “In part, a lot of this [new position] is about really listening to students and their needs," she says. "I’m a big believer in student-led culture, because this is their Jewish community, and I think it’s really important that they feel heard and seen and valued and part of the process.”

Accordingly, Weiner plans to shift the center’s programming to better reflect how students draw connections between their faith, traditions and everyday life. “How do we reach out to where students are emotionally and spiritually?" she asks. "What kind of person do they want to be in the world? What’s my connection to my history, to my family, to my family’s past?”

For now, Rabbi Weiner looks forward to meeting the students once they return to campus. “I think there’s a lot of excitement around this change of having a full-time director, and I’m really excited to be the person who shepherds that change,” she says.