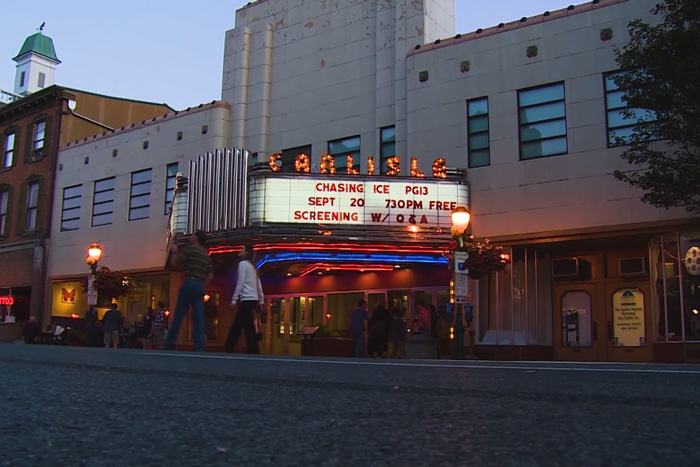 For eight decades, the Carlisle Theatre has been a glittering landmark in downtown Carlisle, Pennsylvania, and a mecca for area residents who appreciate the arts. Now, a student-created, commissioned documentary celebrates this storied theatre's 80th anniversary and the ways that it has enriched the lives of generations of students, faculty and local residents.

Built in 1939, the Carlisle Theatre is believed to be the first air-conditioned building in Carlisle. It operated as a movie house until 1986, when competition from local cineplexes forced its closure. Two years later, thanks to a group of concerned citizens, it reopened with a new name—the Carlisle Performing Arts Center—and an old look, having been restored to its former art deco glory. It now hosts live performances and arthouse movie screenings. The theatre also partners with Dickinson on community projects and events, including sponsored screenings and student performances.

The student documentary, The Gem of Carlisle, was commissioned last fall after Carrie Breschi, coordinator at the Carlisle Arts Learning Center (CALC), attended a public screening of films about local organizations, created by students in a documentary filmmaking class led by James Guardino, adjunct faculty in film & media studies. Impressed by the quality of the students' work, Breschi proposed a video to be shown during the Carlisle Theatre's 80th anniversary celebrations in May. CALC commissioned the work, with support from Carlisle Theatre board members Mary Gilroy and Larry Estes.

The completed 11-minute documentary includes interviews with Carlisle Mayor Tim Scott and other local citizens as they recall lively memories of the theatre during the past eight decades and its continuing significance to the greater Carlisle community. It premiered in the Carlisle Theatre, to an audience of more than 500.

“Besides having a final product to my name that hundreds of people saw, the most enjoyable part of this experience was being able to work alongside my professor,” Latham says. “I was truly inspired by his professionalism throughout the whole experience, and I learned so much from him about working in the film industry.”