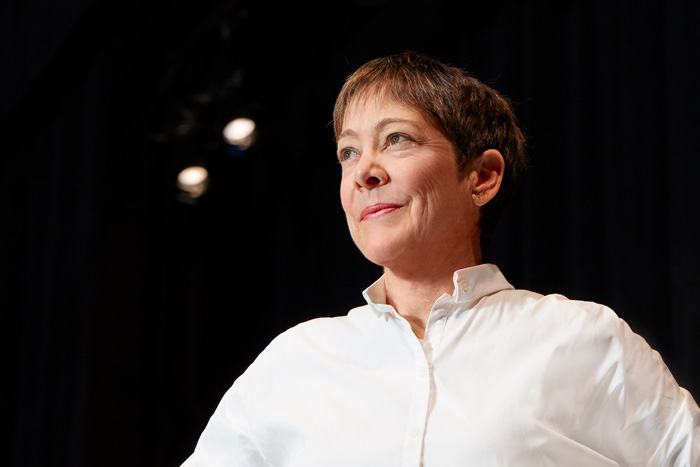 Imagine painting a series of moving canvases. Imagine repeating your exact brushstrokes several times for a live audience. Imagine how long planning this might take. Now imagine you have about half the time you need.

Such is the task of a lighting designer, and it’s a task Rebecca Frederick ’84 knows well. Having spent nearly three decades lighting shows ranging from comedic and gothic plays to Shakespeare and dance concerts, Frederick can distill the work into one deceptively simple statement.

“The job is a matter of using light to serve the telling of the story,” she says.

But dig into that, and you’ll find a complex process of painting with light. After reading the script, she meets with the director and the costume and set designers to understand their visions. Then, after studying the theatre’s dimensions and technical limitations, she assembles her light plot.

“That’s basically a plan of the theatre with overlays of where every light goes, what kind of light it is, what the gel color is, how it’s controlled and where it will be focused,” explains the former dramatic arts major who first caught the lighting design bug at Dickinson when former theatre professors Jim Drake ’70 and David Brubaker tapped her to light a Dance Theatre Group performance.

Once the light plot is set, Frederick gets a run-through or two to make any adjustments in how her light paints all those canvases moving about the stage. Then she still needs to focus the lights with the electrics crew, set lighting cues and refine other technical aspects all before the dress rehearsals and previews that precede a show’s opening.

“There’s never enough time,” she says with a laugh.

And if she has done the job right, her biggest reward is having her work go unnoticed. Even in a production like Dracula, where her design makes a bold statement, using light and shadow to evoke a sense of dread, the goal is for Frederick’s artistry to disappear.

“If it’s done well, it blends in so seamlessly that nobody thinks about the lighting,” she says. “It’s just there.”

Of course, it’s all worth it when she sees the show do exactly what it’s designed to do.

“There are times when you can see the audience falling into the performance, you can feel the energy, the way they’re engaged,” she explains. “You just know everything’s working, and that’s it. That’s why you do it. That’s why there’s nothing like live theatre.”