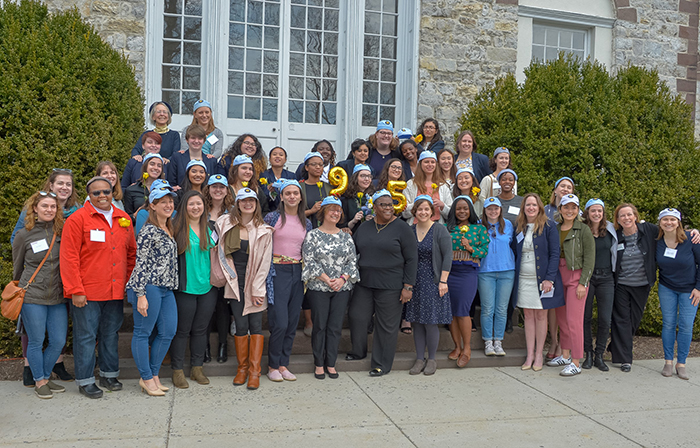 At 95 years young, the Wheel and Chain women's honorary society has many milestones to celebrate and still more to look forward to along the road ahead. Wheel and Chain alumnae gathered on campus this past weekend to brush up on their shared history, catch up on current news and lay the course for another stellar 90 years. The weekend celebration drew alumnae from class years ranging from 1951 to 2018 and from all across the United States, including California and Hawaii.

“Every woman credited their time at Dickinson and membership in Wheel and Chain for positively influencing their life and helping them carry connections and passions beyond the limestone walls,” said Anna Marks Crouch ’09. “ I am always proud to be a Dickinsonian, but I felt an extra sense of pride and joy this weekend.”

Wheel and Chain was founded in 1924 to recognize Dickinson women who demonstrate leadership skills and personal character and are actively involved on campus and in the local community. Ten new junior women are “tapped,” or inducted, into the society every April on the steps of Old West. A few weeks later, the new class of Wheel and Chain members rings the bell in Denny Hall during Commencement. Members are called “blue hats,” referring to the group's emblematic blue caps.

The weekend anniversary celebration began with a welcome reception and a look back to the memories, time-held traditions and values that have bonded them together. On Saturday afternoon, Wheel & Chain alumnae explored what it’s like to live on campus today and the ways in which class of '19 "blue hats" are making a difference in the local community. They also shared perspectives on the future for the women of Wheel and Chain and attended a Sunday brunch and tapping ceremony honoring the newest Wheel and Chain inductees.

“We laughed a lot about how we were similar and different, and we enjoyed swapping stories about what it was like back in our day,” said Molly Flower Eppig ’71, who makes a point of returning to campus for Wheel and Chain events. “It is always inspiring to talk to dynamic, articulate women from Dickinson.”

“It was a joy to reflect back on those days, to reconnect with women who are leading such purposeful lives today, and to be completely awestruck by the caliber of the 10 women and four honorary hats being tapped into the new class,” said Becca Raley ’94, who was particularly moved by an exhibit of Wheel and Chain photographs and archival items that included photos from her class year. “It's enormously gratifying to know that Dickinson is thriving in its mission and that the future—not only for the blue hats but for the campus as a whole—is in good hands.”