Dickinson students will spend their junior year abroad at Oxford 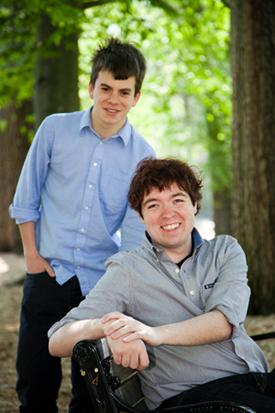 “Everyone there is at such a high level intellectually,” says Martin de Bourmont ’14, of the Mansfield College Visiting Student Programme at the University of Oxford, which is reserved for students from Ivy League and top U.S. institutions. De Bourmont, left, and Colin Tripp ’14, right, are the first Dickinson students to be accepted through a selective new partnership with Oxford.

Colin Tripp ’14 and Martin de Bourmont ’14 will be the first to affix Dickinson’s global footprint to the historic halls of the University of Oxford, where they will spend their full junior year abroad studying at Oxford’s Mansfield College Visiting Student Programme (VSP). Tripp, an English major from Branford, Conn., and de Bourmont, a political-science major from Montville, N.J., were notified of their acceptance April 2 after a nearly three-month selection process.

“I was on cloud nine,” describes Tripp. “I called my family. They knew I really wanted it. My mom cried. She’s already talking about visiting.”

Dickinson established a partnership with the Mansfield College VSP earlier this year as part of a broader initiative to expand global opportunities for Dickinson’s most engaged and academically accomplished students.

Tripp and de Bourmont are preparing for a departure from the lectures and seminars associated with the U.S. higher-education system. Instead, they will experience Oxford’s tutorial system, which emphasizes independent study and critical engagement with topics through one-on-one or small-group meetings and in-depth discussions with professors.

De Bourmont anticipates the challenges presented by the tutorial system, citing similarities in office-hour discussions with his Dickinson professors as a beloved element of his education. “Office hours are a great opportunity to discuss class materials with professors outside of class, flesh out ideas for research topics, debate issues and challenge my own assumptions.”

In partnership with the Center for Global Study and Engagement, a Global Study Advisory Committee established what s a rigorous on-campus selection process that involved in-person interviews, led by him and Professor of English Wendy Moffat, and an in-depth personal essay, which was reviewed and critiqued with guidance from Noreen Lape, director of the writing program. After an Oxford admissions panel reviewed the written files of all applicants submitted by its partner schools, the Dickinson committee learned that both of its student nominees had been accepted.

Tripp and de Bourmont acknowledge the pressure that comes with being the first Dickinson students—and two of just 23 students overall—to be accepted to the Mansfield VSP for the 2012-13 academic year.

“What we do will reflect upon the college,” says Tripp. “I want to best represent what Dickinson is about and pave the way for students to go in the future. A few good years of smart, driven, polite people going there will entrench us and tell Oxford that Dickinson is a good school.”