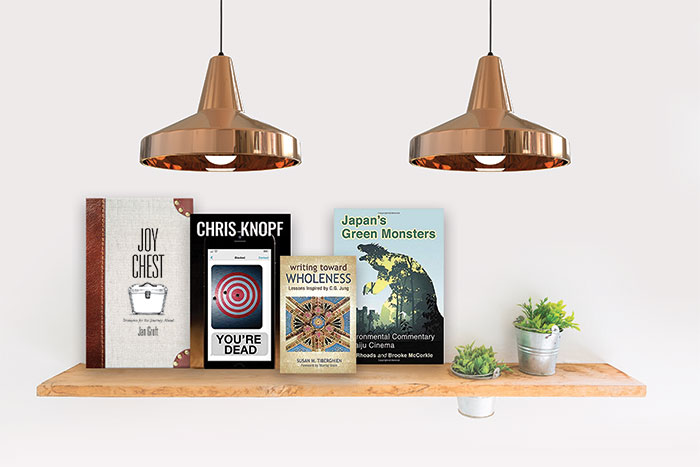 Writing Toward Wholeness encourages readers to embark on their own journey through writing. It reinforces the lessons C.G. Jung learned and shared with millions of people. In focusing on insights and excerpts from Jung’s writings, and from contemporary writers, Susan Marquardt Tiberghien ’55 brings together psychology, spirituality and the arts.

Jan Coco Groft ’71 asked everyday people the following questions: “If you were to create a collection of cherished items to rediscover and relish over and over again, what would you choose to include? And why are those objects—those connections to your past—so important to you?” Their answers became the basis for her fourth book, Joy Chest: Treasures for the Journey Ahead. The keepsakes described include a birth certificate revealing a 60-year-old’s “true identity,” a letter written to a dying friend, the lyrics to a Welsh lullaby and many more fascinating items. Joy Chest provides inspiration for carrying the memories of a lifetime into the future.

Organizational psychologist Dr. Waters is a happily solitary guy with a few deep attachments, including to his boss, Paresh Rajput, the owner of a thriving aerospace company. That is, until he finds Rajput dead. Waters is thrown into a swirl of murderous stalkers, corporate intrigue, amorous female executives and crafty cops who see the inscrutable psychologist as murder suspect No. 1. The latest from acclaimed mystery author Chris Knopf ’73, You’re Dead is an action-filled examination of what happens when minds of all kinds collide and tells the story of how one man can disrupt what the lead detective on the case calls “their clever-clever ways.”

In 1954, a massive irradiated dinosaur emerged from Tokyo Bay and rained death and destruction on the Japanese capital. Since then, Godzilla and other monsters, such as Mothra and Gamera, have gained cult status around the world. Japan’s Green Monsters provides a new interpretation of these monsters, or kaiju-u, and their respective movies. Analyzing Japanese history, society and film, the authors show the ways in which this monster cinema takes on environmental and ecological issues—from nuclear power and industrial pollution to biodiversity and climate change.